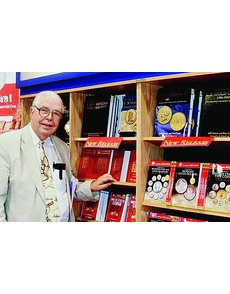 Q. David Bowers at the Whitman Publishing LLC booth at a convention a few years ago. Today, coin show attendance is not what it once was, but the market is stronger than ever.

In the Aug. 26 column, I began a series on the rare coin market based on my own observations as a rare coin dealer since 1953 (part-time at first as I was in school) and my study of numismatic history. Beyond that, finance (my university degree) and economics have been two of my favorite subjects.

Today, the market is stronger than I have ever seen it. And yet, the number of coin shops is only a small fraction of the estimated 6,000 or so active during the boom of the early 1960s (discussed last week) and the circulation of Coin World is down sharply as well, victims of the 1965 market crash. Coin show attendance is down as well.

By all logic, today all coins should be bargain-priced compared to back then! But they are not.

Other hobbies have also slumped or completely disappeared over the years. In the 1960s, many shops opened up with slot-car racing tracks and displays of slot cars for sale. Fewer such shops exist today, though the hobby remains strong. A couple decades ago “pogs” (circular poker-chip-like discs) were forecast to challenge coins and stamps as collectibles. Who cares today?

Similarly, in the 1980s, sports cards were the hottest of tickets. Millions collected them and thousands of shops opened across the country. Prices skyrocketed. If one sports card was great to buy, then a box with hundreds of the same variety was even better to own. Then, crash! Most of the shops are gone. The hobby of sports cards continues, but the excitement is missing.

Several factors arose or expanded to “save” the rare coin market from this common fate. Today far fewer collectors and coin shops exist, and yet all is well in the marketplace.

Problems are elsewhere — such as a sharp falling-off of membership in the American Numismatic Association (the ANA had just 20,273 eligible voters in the recent 2013 biennial election for officers, as compared to 29,299 two years ago), fewer coin clubs than before, and fewer conventions, with even these having reduced attendance. These negatives have not had a measurable effect on the market! Why?

Next week: The first of multiple factors that have made this success possible. Stay tuned!