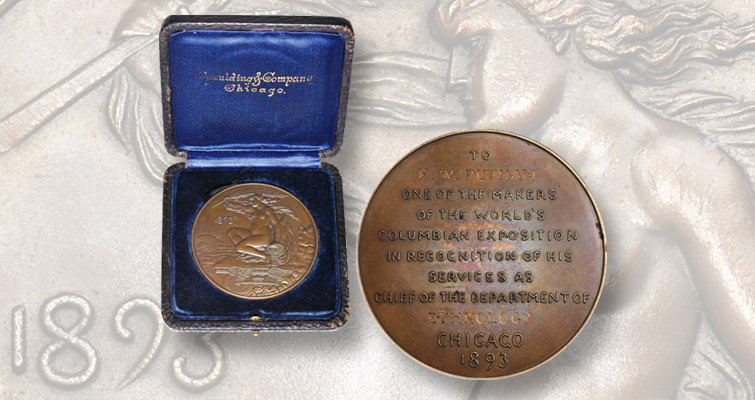 Artist Elihu Vedder designed this 1893 bronze medal, which was presented to department chiefs at the World’s Columbian Exposition. It sold for $4,080 and included its original presentation box.

An 1893 bronze World’s Columbian Exposition Service Appreciation Medal for a Department Chief by artist Elihu Vedder is one of the rarer medals of the exposition.

The featured medal measures 63.4 millimeters and was graded About Uncirculated by Stack’s Bowers Galleries; it realized $4,080 at the auction in August.

It was named on the reverse to F.W. Putnam as chief of the Department of Ethnology, and it came with its original, intact, leather-clad clamshell-case.

Silver “Director Medals” went to 45 members of the board of directors, along with bronze “Designer Medals” to architects, brass “Maker Medals” to department chiefs, and gold “Officer Medals” to executive committee members.

The obverse of the various medals depicts a nude female with cornucopia and laurel branch, and the sun on the horizon in the background, while the reverse has more practical text.

Vedder was also a symbolist painter in his day, known for his dramatic pictures that incorporate vivid storytelling. 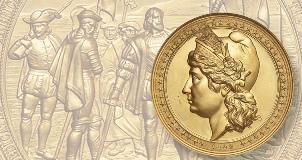 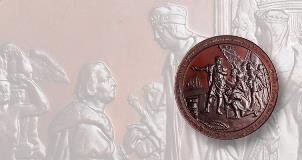 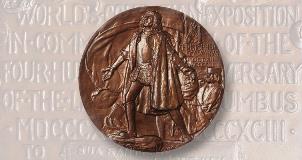