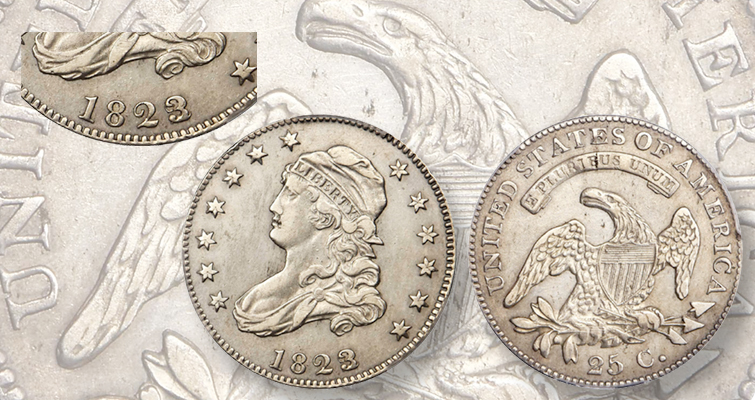 This Extremely Fine 45 1823/2 Capped Bust quarter dollars is one of perhaps 35 survivors of the date. It realized $102,000 on June 18, leading bidding at Stack’s Bowers’ recent Santa Ana auction

In its first public appearance since 1935, an 1823/2 Capped Bust quarter dollar brought $102,000 and led bidding at Stack’s Bowers Galleries’ June 18 and 19 Santa Ana auctions. Graded Extremely Fine 45 by Professional Coin Grading Service, it is the plate coin for the B-1 variety in Ard W. Browning’s 1925 reference The Early Quarter Dollars of the United States 1796–1838.

The auction catalog notes, “Few American rarities have been so lovingly documented as the 1823/2 quarter, so carefully studied for provenance and technical nuance, and so appreciatively collected by those able to purchase one.” It seems most of the delivered mintage recorded in 1823 were quarter dollars dated 1822. Today perhaps 35 1823/2 quarters survive, all of which are overdates with the 2 clearly visible under the 3 in the date.

This one traces back to George S. Seavey circa 1873, and next appeared in the June 1890 sale of the collection of Lorin G. Parmelee, trading hands again several times before appearing in Louis R. Hemmer’s Premium List of May 1935 and remaining off the market since.

The cataloger concluded, “While not technically a ‘new’ discovery, this offering is certainly among the most exciting re-discoveries in recent memory from the early quarter series,” and bidders agreed. 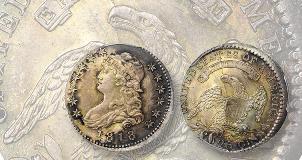 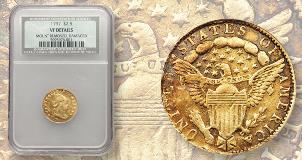