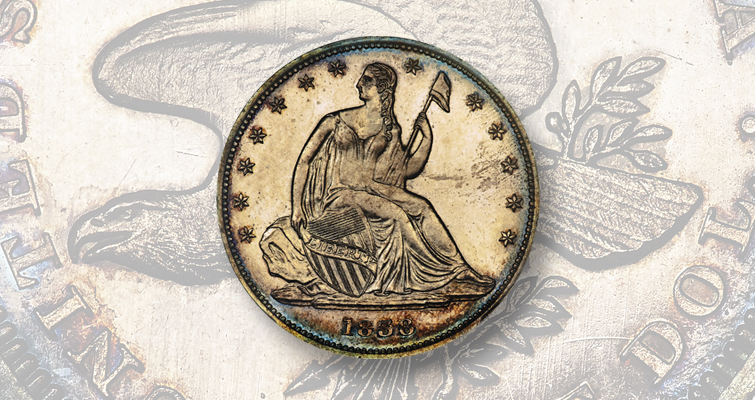 An 1838-dated pattern Seated Liberty half dollar is a restrike produced at the Philadelphia Mint decades later, likely to satisfy collector demand. Graded Proof 65, the Judd-80 half dollar sold for $43,200, an improvement on the $29,900 it sold for in 2009.

Heritage’s fourth Simpson auction was originally scheduled for Feb. 18, but bad weather in Texas forced postponement of the sale. In a time when most auctions are held entirely online, the rescheduling did not seem to impact prices realized.

The Bob Simpson Collection is well-known for its wonderful patterns. Simpson IV offered many top-quality pieces, including an 1838 Seated Liberty half dollar graded Proof 65 by Professional Coin Grading Service, listed as Judd 80 in the pattern reference, that sold for $43,200. While dated 1838, it was likely produced in the late 1860s to early 1870s as a restrike issue.

The obverse depicts a slightly modified Seated Liberty device, differing from the design used on regular issue coinage, while the reverse features what’s called a “Defiant Eagle” design, clutching an olive branch and six arrows. The piece is one of just six examples known of this handsome pattern.

Heritage observes, “Most of each side is brilliant, with a thin ring of blue toning around the margins,” while noting the weak strike on the reverse is as typically seen. It has a long ownership history tracing back more than a century to a 1906 Chapman Brothers auction and more recently sold in 2009 at Heritage’s offering of the Queller Family Collection, where it was graded Proof 65 by Numismatic Guaranty Corp. and realized $29,900. 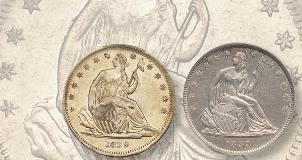 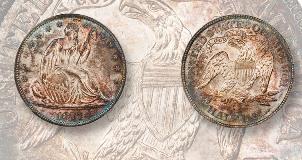 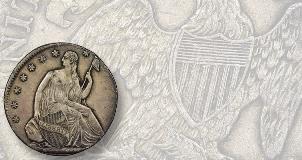