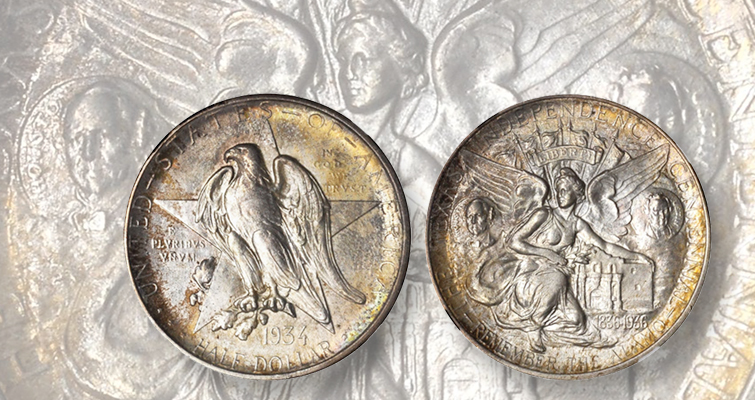 This handsome MS-67 1934 Texas Centennial half dollar features original toning and would make a great choice to represent the type. It sold for $432 on March 5.

The Texas Independence Centennial commemorative half dollars were struck in an ambitious multi-year program, with issues produced at the Philadelphia Mint in 1934 joined by Denver and San Francisco Mint half dollars between 1935 and 1938. Many collectors are content to get a single example for type — typically the 1934 half dollar, which had a series-high mintage of 61,463. The 1935 to 1938 issues are often collected by year in “P, D, S” sets with one example struck from each Mint.

Stack’s Bowers Galleries offered a fantastic 1934 Texas half dollar at its March 5 Baltimore Expo online auction. The coin, graded Mint State 67 by Numismatic Guaranty Corp., sold for $432. It has the dusky golden green toning often seen on the issue. Some collectors would praise its originality, while others prefer a more brilliant representative.

The issue was extremely well-produced, and even certified MS-65 examples can be found for $150 with some looking, with attractive ones approaching $180 to $200. Anthony Swiatek writes in his Encyclopedia of the Commemorative Coins of the United States that the Texas commemorative is most commonly found with some light wear, since examples were treated as souvenirs and often treated carelessly by non-numismatic owners.