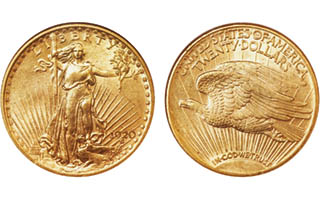 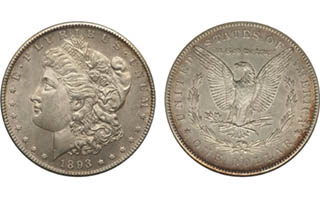 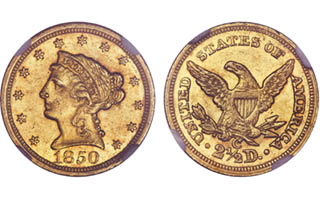 Here are a few selections of examples of rare issues in the lower Mint State grades of MS-60 and MS-61. Coins in this grade are often not unattractive, but generally have either a weak or uneven strike, many contact marks or dull luster.

For collectors of Morgan silver dollars, the 1893-S is a classic key issue with a low mintage of 100,000 examples. Nearly all of the surviving pieces are in well-circulated condition, making Mint State examples rare. This one, graded MS-61 by ANACS, brought $94,000, and provided an opportunity to purchase an entry-level Mint State representative.

Although the piece was described as having slightly thin Mint luster, it was also “remarkably clean, especially for the grade.”

Generally, MS-61 coins have numerous surface imperfections, being at the low-end of the MS-60 to MS-70 Uncirculated grading scale.

Numerous Saint-Gaudens $20 double eagles dated from the 1920s and 1930s ended up in the melting pot. As such, these issues are often much rarer than the mintages would suggest.

For example, the 1920-S double eagle has a recorded mintage of 558,000, but Heritage estimates that only 65 to 75 examples of the issues exist in Mint State grades and the population of survivors only gets a small boost with the addition of lightly circulated examples.

This one, graded MS-60 by Numismatic Guaranty Corp., in part due to a weak strike and numerous shallow marks, brought $38,187.50.

One area where low Mint State grades are accepted — often due to the absence of any alternatives — is with early southern Branch Mint gold coins. The coins from Dahlonega, Ga., and Charlotte, N.C., are known for being unevenly struck and have low survival rates from generally low mintages (especially when compared to their Philadelphia Mint counterparts).

Take this 1850-C Coronet $2.50 quarter eagle with an original mintage of 63,591 pieces. It triples in price as one goes from an About Uncirculated 50 grade to a Mint State grade.

Perhaps a couple dozen exist in Mint State grades. This one, formerly in the collection of Louis E. Eliasberg Jr., is graded NGC MS-60 and characterized by a better strike than usually seen on these crudely produced issues. It sold for $12,925.

Coronet gold $20 double eagles, with their large open fields, coupled with gold’s softness, are prone to marks and abrasions.

The flashy example had nice prooflike surfaces and solid luster, but the catalog notes the primary deficiency in plain language, writing, “An unfortunate grouping of abrasions in the left obverse field keep this sparkling Carson City twenty from an even higher grade.”