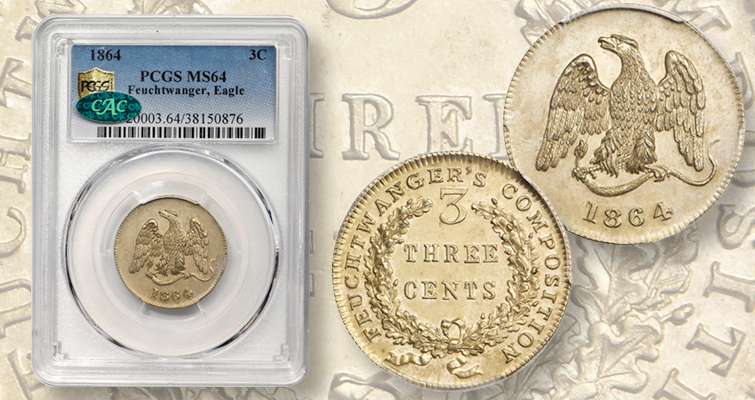 A 3-cent token by Lewis Feuchtwanger dated 1864 was struck for collectors, and this one, graded MS-64 with a green CAC sticker is among the finest-known. It realized $10,200 at Stack’s Bowers Galleries’ recent Santa Ana sale.

The tokens of Lewis Feuchtwanger are widely collected and even are included in A Guide Book of United States Coins on pages 424 to 425 of the 2020 edition.

The Bavarian-born metallurgist and merchant promoted a composition of German silver, blending nickel, copper and zinc. He opened a pharmacy in New York City in 1829 selling goods imported from his home country.

Stack’s Bowers explains, “His store cards from the Hard Times era are well known among numismatists, during which time he tried to persuade Congress to adopt Feuchtwanger’s composition (i.e., German silver) for our nation’s coinage.” He was ultimately unsuccessful in his efforts to persuade the U.S. Mint, and his 1837-dated cent and 3-cent trial pieces circulated in the United States during the coin shortage of 1836 to 1844.

Feuchtwanger’s 3-cent piece dated 1864 was produced for collectors and did not see commercial use. The offered example, graded Mint State 64 by Professional Coin Grading Service, is tied with seven others as the finest-certified at PCGS and carries a Certified Acceptance Corp. sticker indicating quality within the grade. The rare token realized $10,200. 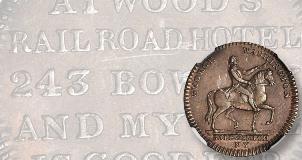 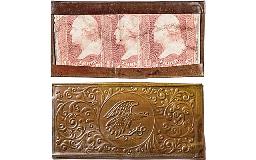