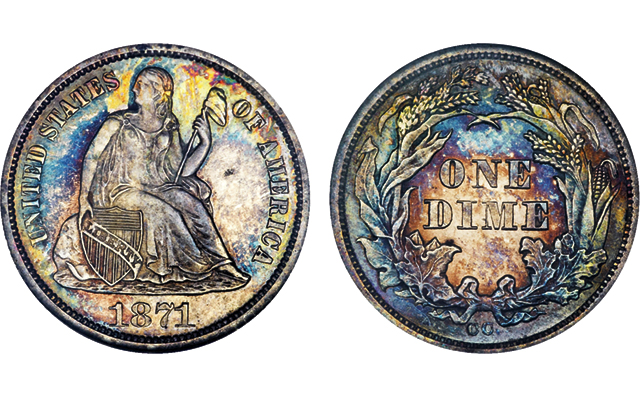 A colorful MS-65 1871-CC Seated Liberty dime is possibly the finest graded of this classic Carson City Mint key date. It will be offered as part of Heritage Auction’s Oct. 27 sale of the Eugene H. Gardner Collection.

It is going to be a busy autumn for the rare coin market as several major auctions will circulate fresh coins into the marketplace to keep things lively and dealers supplied.

October sees an addition to the coin show calendar with the new Professional Numismatists Guild’s New York Invitational coin show at the Millennium Broadway hotel in Times Square. The show, from Oct. 9 to Oct. 11, features official auctions by both Heritage and Stack’s Bowers Galleries. The PNG will follow this up with another show in Dallas, Feb. 26 to 28, 2015, at the Gaylord Texan Resort near DFW airport.

Legend Rare Coin Auctions’ Regency Auction IX, set for Oct. 2 in Las Vegas at The Bellagio hotel and casino, will start October with a bang. Leading the sale are some extraordinarily toned Morgan dollars including an 1893-S dollar graded Mint State 65 by Professional Coin Grading Service, with a green Certified Acceptance Corp. sticker, that was formerly in the Eliasberg Collection.

The Gardner Collection is noteworthy for its silver coins, and one of the most desirable is an 1871-CC Seated Liberty dime graded MS-65 by Numismatic Guaranty Corp. The issue is the first Carson City Mint dime, with a mintage of just 20,100 coins, and it is rare in Mint State grades. Heritage notes that it is “at a minimum, tied for the finest certified example, and that might turn out to be the finest certified by two grade points.” A second NGC MS-65 example listed in the condition census may be a duplicate of the present coin. When the present example was last offered at a Bowers and Merena auction in 2005, it sold for $230,000 and at a 1990 auction, graded “Gem Brilliant Uncirculated,” it sold for $50,600.

Stack’s Bowers will host multiple auctions including a Rarities Night as the official auctioneer of the Whitman Coin and Collectibles Winter Expo in Baltimore, Oct. 29 to Nov. 1. One of the leading consignments is a comprehensive collection of 1853 U.S. coins including an 1853-O Seated Liberty, No Arrows half dollar graded Good 6 by PCGS that is one of just four known. It has an ownership history that traces back to the 19th century. Also included is an 1853-D Coronet, Large D gold $5 half eagle graded MS-64+ by PCGS, with a green CAC sticker.

On Nov. 14 and 15, Heritage will offer the fifth sale of coins from the collection of St. Louis numismatist Eric P. Newman. The fifth sale is noteworthy for its extraordinary selection of Early American coins and other well-known rarities graded by NGC like an MS-66 pewter 1776 Continental dollar, an About Uncirculated 50 1794 Flowing Hair silver dollar and a Proof 65 1879 Flowing Hair $4 “Stella” pattern coin.

It will be a busy fall, for sure.