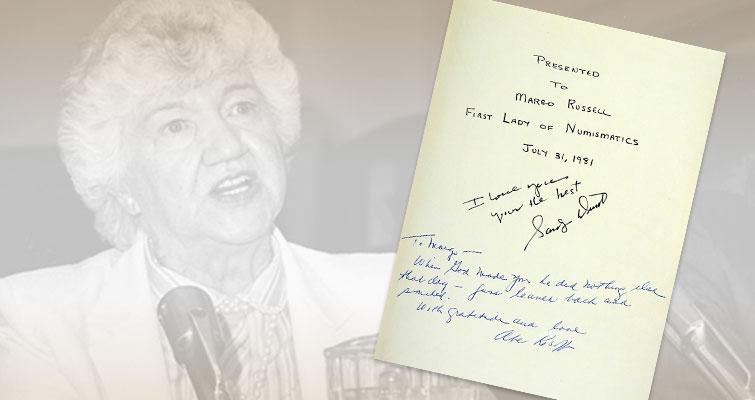 The collecting area of numismatic literature is a wonderful complement to a collection of regular issue coins, and it’s an area where one gets a sense of the history of objects along with the history of coin collecting. Kolbe and Fanning Numismatic Booksellers’s Aug. 22 auction featured selections from the libraries of former Coin World editor Margo Russell and collector Raymond Hale. Those curious to learn more about this fascinating collecting area would be well-advised to look into joining the Numismatic Bibliomania Society, online at www.coinbooks.org.

Margo’s personally inscribed copy of Abe Kosoff Remembers: 50 Years of Numismatic Reflections was published in 1981 by Stanford Durst. It consists of Kosoff articles that originally appeared in Coin World.

The auction firm described the text as, “Very entertaining if a bit one-sided at times.” This book was in a gorgeous leather binding with marbled endpapers.

What really made it special was the inscription, as it was inscribed to Margo by both the author and the publisher. Kosoff wrote to Margo, “When God made you, he did nothing else that day — just leaned back and smiled,” and Durst wrote simply, “I love you — you’re the best.”

As Fanning observed, “Russell seemed to bring out the best in people.” Multiple bidders competed for the special book and it sold well-above the presale estimate of $150, realizing $352.50.