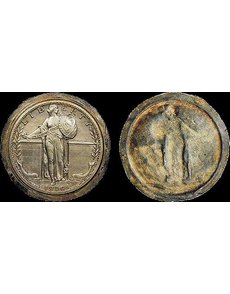 This bas-relief bronze cast of Hermon A. MacNeil’s early obverse design for his 1916 Standing Liberty quarter dollar failed to find a bidder in Baltimore, despite realizing $120,750 when offered at a 2008 Stack’s auction.

From nearly all appearances, it seems that the rare coin market is in a good place.

Dealers were happy following the Whitman Coin & Collectibles Baltimore Expo, March 14 to 17, and Stack’s Bowers Galleries’ floor auction sessions held in conjunction with the show realized in excess of $10 million.

The results from Stack’s Bowers Galleries’ Baltimore auction show that the market’s taste for classic early U.S. rarities shows few signs of slowing down. A Mint State 64 1792 half disme realized $470,000.

Oddly, the catalog did not include a provenance for this piece, but it appears to be the same piece that was offered at a July 2008 Stack’s auction where it sold for $373,750, according to the earlier auction’s printed prices realized.

Sellers who try to predict the market with high reserves are often coming up short, especially regarding unusual coins and other numismatic items that are challenging to value due to a lack of comparables in the marketplace.

A few highly interesting lots failed to meet their reserves including a bas-relief bronze cast of an early obverse design for the 1916 Standing Liberty quarter dollar. It was described as “Possibly unique and intended for preparation of dies.”

It did not meet its reserve of $65,000, although it had realized $120,750 when offered as part of Stack’s sale of the Minot Collection on May 21, 2008. The 2008 lot description asked the question, “What kind of Standing Liberty quarter is this?” before answering, “The truth is this is what Hermon MacNeil had intended his new quarter to look like.”