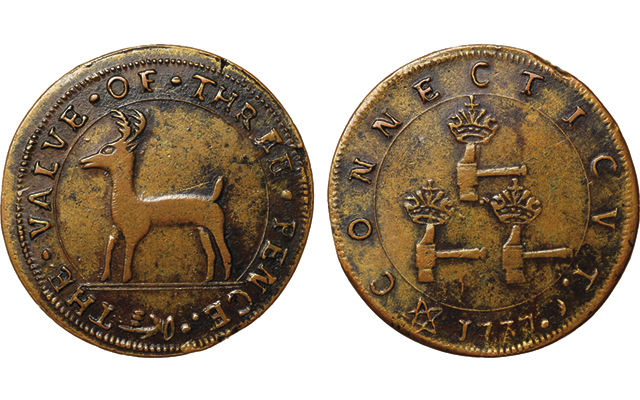 Newman IV offered many of the rarest Colonial coins imaginable, including this 1737 Higley, Three Hammers copper in Numismatic Guaranty Corp. About Uncirculated 50 that brought $470,000.

On May 16, collectors and dealers gathered in New York to compete for early American coins from Eric Newman’s exhaustive collection. This was the fourth auction of coins from the Newman cabinet, but the first to include Colonial-era coins, the items for which Newman has become best known as a researcher and collector.

Some coins were self-evidently special. It doesn’t take an expert to figure out that a silver Continental dollar, particularly the finest one known, is a special piece. Just four are known. Does the fact that the other three have all sold in the last decade, two in the Ford I sale of 2003 and another in the Ford VII sale of 2005, make the coin less special? It does not, though it may make the opportunity to buy one seem less important. At its price of about $1.4 million, this coin may prove to be a great bargain.

Some of the very special coins may have taken a more refined eye, or at least a greater background in early American coins, to have appreciated. A London Elephant token is normally nothing too unusual, even in high grade. But one struck in brass?

The Newman specimen appears to be the only brass Elephant known. It hasn’t sold publicly since 1871. That’s pretty special.

Higley coppers are, as a class, far rarer than London Elephant tokens, but they still turn up pretty regularly. Most survivors could be charitably described as ugly and worn out, and “choice” is a relative term when applied to them. The Newman Three Hammers Higley is a coin apart. “Special” barely covers how different its sharpness, its strike, and its surface quality is from even Higleys that have been accurately described as “nice” in the past. That Higley — wow. That coin is special.

Dozens more examples of coins made experienced, even jaded, numismatists feel the joy of real discovery. From the elegance of the fully-struck and well-centered Ryder 3 Vermont copper (Colonial Coins of Vermont by Hillyer Ryder), to the crudeness of the matched pair of “Bungtown” Connecticut coppers (Miller 2.5-V and Miller 2.6-BRI, State Coinage of Connecticut by Henry Miller) struck from handcut dies, to the most impressive four-coin denomination set of Sommers Island “Hogge” coins most of us have ever seen, this edition of the Newman sale, at a minimum, excited everyone for what may be offered in the future.