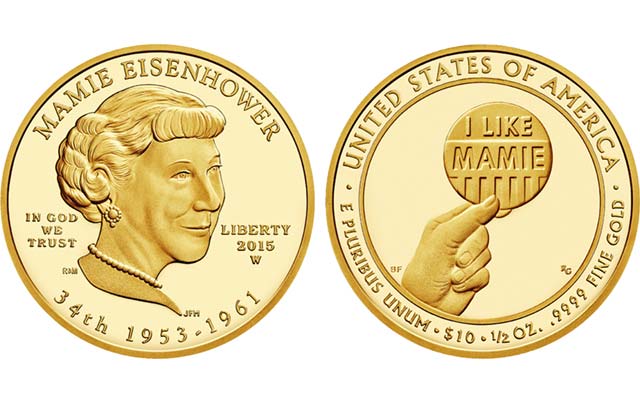 Proof and Uncirculated versions of the 2015-W Mamie Eisenhower, First Spouse gold $10 coin are to go on sale from the U.S. Mint beginning at noon Eastern Daylight Time May 7.

Retail prices for the Eisenhower coins, based on the Mint's pricing grid for coin's containing precious metals, will be announced May 6.

Each coin contains one half troy ounce of .9999 fine gold. The release is limited to a maximum mintage of 10,000 coins combined in Proof and Uncirculated versions.

The reverse, designed by AIP Artist Barbara Fox and engraved by U.S. Mint Medallic Sculptor Renata Gordon features a woman's hand holding up a political campaign button with the slogan “I Like Mamie,” referring to Mrs. Eisenhower's popularity as first lady, her involvement in her husband's presidential campaigns and the popular campaign slogan “I Like Ike.”

Sales recorded through April 26 for the Bess Truman coin had reached 1,350 coins of the Proof version and 847 of the Uncirculated version.