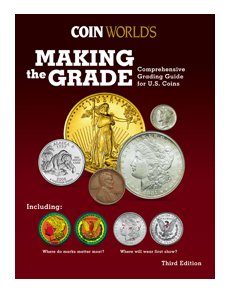 The book is a visual guide to grading more than 80 series of U.S. coins, written by Beth Deisher in her last project as Coin World editor before her retirement in April.

The third edition is an expansion of the 2008 second edition, both in the number of coin series covered and in physical dimensions.

The new edition of the book covers more than 30 new series not found in the second edition (which offers 50 series), with the majority of the new chapters focusing on 18th century and early 19th century coin series, as well as the latest series of 21st century coins.

In addition, the new book is physically larger than the previous edition, measuring 8.5 inches by 11 inches, compared to 9 inches by 6 inches for the second edition.

The first edition, published in 2005, features the 25 most widely collected series of U.S. coins, in the 9-inch by 6-inch format.

The third edition, like the two before it, uses a standard format:

? A history is provided for each series, often including its design development and often featuring a discussion of grading peculiarities distinctive to the series.

? Color-coded maps (developed by James Halperin of Heritage Auction Galleries, who is widely recognized as one of the best coin graders in the hobby) detail the critical areas for marks on a coin. The color maps help readers identify the areas on a particular design where a contact mark or other damage will most affect the value.

? Other images (developed by longtime ANACS grader and authenticator Michael Fahey) detail the high points of each design. The high points maps illustrate the first areas to exhibit wear and are designed to help collectors distinguish between About Uncirculated and Uncirculated coins.

? Large, color, obverse and reverse images of the coins in multiple grades are provided, generally from low grades to multiple levels of Mint State (some modern series that do not circulate, such as bullion coins, or do not circulate widely, such as Presidential dollars, are represented only by Mint State examples). Readers can compare their coins to the images in the book and determine the grades. Grading descriptions for each pair of images help further distinguish individual grades.

The third edition features more than 80 different series of circulating and bullion coins, capturing the vast array of coins from the 1793 Flowing Hair, Chain cents to the America the Beautiful quarter dollars (including the 5-ounce silver bullion versions) and First Spouse gold bullion coins.

Other new series include Flowing Hair and Draped Bust half dollars; Flowing Hair dollars; all three series of gold dollars; five series of $2.50 quarter eagles; gold $3 coins; all four series of half eagles issued before the Coronet series; and Capped Bust and Coronet eagles.

Also contributing to the book were Fahey, who provided the grading for each series; Coin World news editor William T. Gibbs, who was coordinating editor for the book and wrote some of the new grading descriptions; Fern Loomis of the Coin World editorial staff, proofreading and fact checking; and Cinda McAlexander, designer of the book.