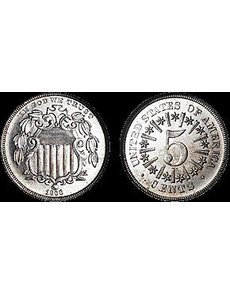 The copper-nickel 5-cent piece was new in 1866. Proofs could be ordered from the Mint for 10 cents each. Today, gem Proof examples are worth several thousand dollars each.

I dearly love my bound set of the AJN. The other day I took Vol. 1 and 2, bound in a single book, from the library and spent several hours with it. In seeking more information on an old citation I tapped into the Internet — to find that the AJN is digitized and available for free (http://archive.org/details/americanjournal
o46ameruoft
). This is a marvelous asset for our hobby, and I strongly urge you to check it out. Start by browsing through the first issue. Unless I miss my guess, within a couple hours you will become a lover of numismatic history!

“THE NEW FIVE CENT PIECES. This new coin will soon be in circulation. It is of pure nickel, approaching very nearly the appearance of silver, and is a very neat coin. It is a trifle larger than the nickel cents. On one side it has for a centre relief the ordinary shield crowned with a laurel wreath, which hangs gracefully over the sides; this is surmounted by the motto, ‘In God we trust,’ and at the base the date, 1866. On the reverse is the denomination — a figure 5 in the centre of a circle of stars; over the figure are the words ‘United States,’ and under it the word ‘cents.’ ”

Soon afterward the AJN reported that Proofs of the new coin could be obtained from the Mint for 10 cents each. Not long afterward the Shield 5-cent coin became the subject of several articles, all of which took the Mint to task for not creating a better design.

The journal’s first feature story about a coin associated with the American series treated the Bermuda coinage of the 17th century. Civil War tokens, called “copperheads” at the time, were front row center in terms of editorial coverage in the first several issues. One item covered what may be the first portable coin album — a wooden panel with openings sandwiched between two sheets of glass.