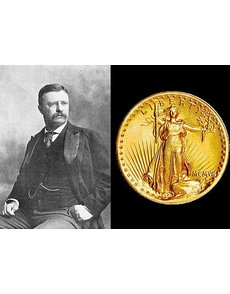 The 2012 presidential campaign was the lowest-class such event I have ever witnessed. According to one account only 8 percent of the advertisements were positive. That said, I am delighted to have no more unsolicited calls from campaigners and pollsters.

Following passage of the Mint Act of April 2, 1792, President George Washington took a deep interest in the nation’s coinage. Washington was instrumental in having the first federal coins struck — about 1,500 silver half dismes — and may have personally provided the silver metal.

The federal Mint facility was not yet ready, so these half dismes were struck in a private shop nearby. In his annual message to Congress the president specifically mentioned the half dismes. Then a long period of time passed before another president took great interest in coinage.

In 1904, Theodore Roosevelt went to the Smithsonian Institution, then headquartered in the “Castle” building that is still an icon on the Washington Mall. He viewed the rare coins on exhibit, was impressed with the sculpturelike and artistic features of ancient Greek coins, and determined to improve American designs. As is well known to numismatists, he commissioned Augustus Saint-Gaudens, the country’s most famous sculptor, to create new motifs for all denominations from the cent to the double eagle. The artist was in failing health and died Aug. 3, 1907, by which time he had created the 1907 Saint-Gaudens, High Relief, Roman Numerals gold $20 double eagle and the 1907 Indian Head gold $10 eagle.

Then another long gap — still going on!

The National Numismatic Collection at the Smithsonian’s Museum of American History is a very short walk from 1600 Pennsylvania Avenue. I am not aware of any sitting president in recent decades taking the time to visit the display — one of the greatest in the world. And yet, according to the Mint, many millions of citizens regularly buy new commemoratives, American Eagles, and the like, and more than 100 million have taken an interest in State quarter dollars. Perhaps there is a voting bloc here?

If for no other reason, perhaps a presidential visit to the Smithsonian’s National Numismatic Collection exhibit is overdue.