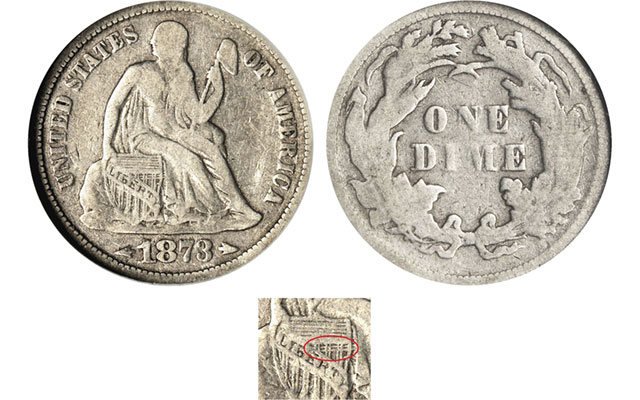 A common 1873 Seated Liberty, With Arrows dime in Fine 12 grade is worth perhaps $25. The illustrated coin with doubled die obverse sold for $1,265 a few years ago and is worth more now.

As you read these words, I am immersed in the manuscript of A Guide Book of Liberty Seated Silver Coins, to be delivered to Whitman in early summer.

Time was when the majority of numismatists interested in Seated Liberty coins sought as many different basic dates and Mint marks as possible as well as overdates and other varieties listed in A Guide Book of United States Coins (the “Red Book”). There was a limited interest in varieties beyond this point — such as minute variations in dies. Such pursuits were aided by Daniel W. Valentine’s The United States Half Dimes published by the American Numismatic Society in 1931, and M.L. Beistle’s A Register of Half Dollar Die Varieties and Sub-Varieties; being a description of each die variety used in the coinage of United States half dollars, published in 1929.

The hobby of coin collecting expanded dramatically beginning in 1960 with the launching of Coin World, the first weekly publication in the hobby, and nationwide publicity surrounding the “rare” 1960 Lincoln, Small Date cent. Prices rose across the board, especially for federal coins minted from 1792 onward. It became very expensive to collect multiple series. By that time only two American specialized clubs or groups were devoted to a specific discipline: the American Vecturist Association, founded in 1948, devoted to transportation tokens, and the Rittenhouse Society, a group of researchers and writers, established in 1957.

The Liberty Seated Collectors Club was formed in 1974 through the efforts of Kam Ahwash, a specialist in Seated Liberty dimes who in 1977 published the Encyclopedia of U.S. Liberty Seated Dimes 1837–91, the first modern study of die varieties among coins of that design. Today the club and its Gobrecht Journal are the focal point for the Seated Liberty series. For most of the period up to 2014, John W. McCloskey was editor and main contributor to the Journal.

Many other books have added to knowledge, including these: Walter Breen’s Complete Encyclopedia of U.S. and Colonial Coins, 1988, listed all series and gave much information about die varieties, including in the Seated Liberty series. Bill Fivaz and J.T. Stanton’s The Cherrypickers’ Guide to Rare Die Varieties became popular and describes interesting and often valuable varieties that in many instances can be purchased unattributed at no more than a common coin of the same date and Mint would cost. Kevin Flynn offers The Authoritative Reference series giving enlarged images and descriptions of varieties of many coin series.

As a general observation, newcomers who enter numismatics to concentrate on investment and whose main interests are rarity and value burn out quickly. Most are gone within three years or so. In contrast, specialists often make numismatics a lifetime pursuit. Plus, most make a lot of profitable “finds”!