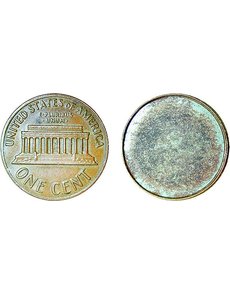 A roll of Lincoln cents contained the above Lincoln cent, which is actually a shell from a privately created novelty piece known as a magician’s coin, used in performing magic tricks.

Searching through rolls of hand-wrapped United States cents is always a magical experience.

I’ve been a roll searcher for five decades and I still get a high voltage charge out of the anticipation I feel as I open and examine the contents of each roll.

My excitement is, and always has been, a direct result of not knowing what will be discovered amongst what are mostly normal and unremarkable coins.

When I find something as unusual as this week’s highlighted coin or of a portion thereof, I really feel the magic that makes this hobby so much fun!

While some of you might immediately recognize what the pictured coin is, I thought that I might start by telling you what it is not.

I am only mentioning these possible scenarios since, over the years, I’ve actually heard some of these concepts either in jest or as actual explanations proffered as to what a piece like this one truly is.

The coin discovered this week is not a rare U.S. Mint manufactured experimental half cent. Nor is it a type of error coin that is missing a clad layer. It is definitely not a portion of a “spy coin” that was used to clandestinely conceal a microchip used to track the circulation of U.S. coins. Finally, it is not a post-1982 copper-plated zinc composition cent that has lost, due to damage, its obverse along with the zinc core.

I know, I shook my head, too, when I first heard those explanations, although the microchip one almost made sense.

This piece is actually a component part of something known as a “Magician’s Coin.”

The illustrated portion, known as the “shell,” is supposed to have another modified coin called an “insert” placed within the hollowed out portion.

Most often the insert, machined to tolerances as small as 1/1,000th of an inch, will be made so that when the two parts (shell and insert) are properly engaged, the coin will appear to have two reverses.

Another type of insert might be made with a dime so that the magician can instantly change a cent into a dime by simply flipping the coin over while reciting some magical hocus pocus words as he or she performs what to many is an amazing and totally baffling sleight of hand trick.

While I was hoping to find the insert that would have been combined with this shell as I continued looking through the rolls, the insert never appeared.

Maybe if I say “Abracadabra,” the missing insert will show up in the next batch of rolls that I search through.

Share your finds with me. Go to www.askaboutcoins.com and use the Submit Question button to send me an email message.