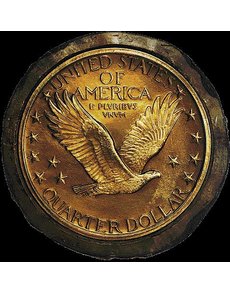 Both obverse and reverse models (reverse shown) in bronze were unknown until purchased at a garage sale by an anonymous collector in 2001. The bronze models last sold at auction in 2008. 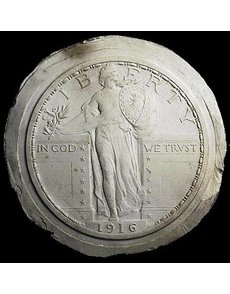 Liberty, as depicted on a MacNeil plaster model for the obverse, has a sunburst on her shield, a feature not included in the final Standing Liberty quarter dollar design. 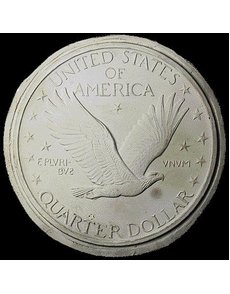 MacNeil’s plaster model of the reverse shows an awkward break in the motto E PLVRIBVS VNVM. The motto was moved above the eagle on the quarter. 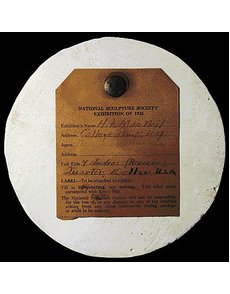 A tag affixed to the back of the MacNeil plaster reverse notes that it was displayed at the National Sculpture Society Exhibition of 1923. 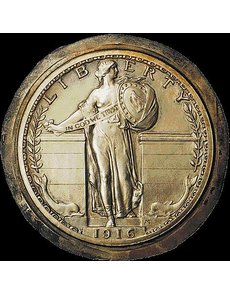 A Hermon A. MacNeil cast bronze model for the Standing Liberty quarter dollar obverse, as well as three other unique models, will be auctioned by Stack’s Bowers Galleries during the ANA’s World’s Fair of Money in Philadelphia. 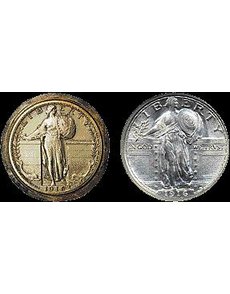 At left is an early model approved by the Treasury secretary for the 1916 Standing Liberty quarter dollar, with an actual 1916 quarter shown at right to illustrate the modifications made to the design before striking.

Four different models crafted by Hermon A. MacNeil during his creation of the Standing Liberty quarter dollar design are slated to be auctioned by Stack’s Bowers Galleries during the American Numismatic Association World’s Fair of Money in Philadelphia, held Aug. 7 to 12.

Two of the models are composed of plaster; the other two models are made of bronze.

The bas-relief bronze casts — one an obverse design featuring dolphins and the other an alternate Flying Eagle reverse design — were previously sold and purchased in Stack’s May 2008 Minot Collection sale.

Stack’s Bowers Galleries president Chris Napolitano said: “The offering of four different models for one of America’s most beautiful, most admired designs is unique in numismatics. Our ANA Convention Sale will be forever remembered for the treasures [it] contains across the spectrum of numismatics, including many pieces such as these models that may never be offered again.”

Historian and numismatic researcher Roger Burdette, author of the three-volume work Renaissance of American Coinage, has composed catalog descriptions for the four models.

The first bas-relief plaster model, made from one of MacNeil’s proposed designs for the Standing Liberty, Bare Breast, or Type I, obverse, features a sunburst on Liberty’s shield. It has a 135.5-millimeter inner diameter, with a border measuring approximately 14.5 to 16.5 millimeters. At its greatest point, it has a thickness of 19 millimeters. It weighs 282.02 grams.

According to Burdette, this model was not submitted to the U.S. Mint for consideration during the Treasury Department’s 1916 design contest for the dime, quarter dollar and half dollar.

In his description of the piece, Burdette states, “Liberty is walking forward through a plain gate or portal. Inscribed on the portal is the motto IN GOD WE TRVST. She holds a partially uncovered shield in her left hand; her right hand holds the end of a plain sash and an olive branch.

“The figure of Liberty differs in details from the approved design of May 1916. Drapery of the figure is less clearly defined and softer, and the figure’s left leg is more of a suggestion rather than a clearly defined element. Liberty holds a sprig of olive in her right hand, and this partially covers the letter L in LIBERTY. However, the obscuration is less than on the May 1916 version. The most obvious difference is the shield boss or ‘umbo.’ Here, MacNeil used a sunburst with alternating rays and curved flames — a striking detail reminiscent of the Saint-Gaudens double eagle reverse. The sunburst is partially encircled by 13 beads or rivets. The shield cover is loose-fitting and baggy as on all the early 1916 compositions.

“Liberty’s head is also differently modeled. She wears only a small tiara of olive sprigs, and no helmet or other head gear. Her hair is long and flows with the breeze behind her neck and off to the right above the shield and partially overlapping the letter E in LIBERTY. This is a simplified version of the head used on MacNeil’s design of August 1916 (see Stack’s Minot Collection sale, May 2008, lot 1378). The sunburst and flowing hair motifs have not been identified on other MacNeil coin designs.”

The second plaster model, featuring MacNeil’s Flying Eagle design for the reverse of the quarter dollar, has an inner diameter of 135 millimeters. The border surrounding the design is approximately 7 millimeters. It has a thickness, at its greatest point, of approximately 19 millimeters, and weighs 219.52 grams.

The back of the reverse plaster is plain but has a tag affixed, noting that it was displayed at the “National Sculpture Society Exhibition of 1923.”

Burdette writes of the reverse model: “The design of the plaster model offered here was undoubtedly one of those shown to [Mint] Director [F.J.H.] von Engelken. It is similar to the adopted version but has a different placement of three stars, and an unusual hyphenated version of the motto E PLVRIBVS VNVM. On this model the three stars are located one in front, one behind and one above the eagle. The adopted design has all three [stars] placed below the eagle.”

Describing the pedigree of the plaster models, Burdette says, “After Hermon MacNeil died, the contents of his studio were reportedly hauled to the dump. Some of his drawings and other items were salvaged by a neighbor, commercial illustrator John A. Coughlin. Mr. Coughlin is the source of the famous flying eagle drawings purchased by Eric P. Newman, and of MacNeil scrapbooks and letters now preserved in the Smithsonian Archives of American Art located in Washington, D.C. It is possible this plaster model was rescued in a similar manner. This model was kept as part of the estate of MacNeil’s second wife, Cecelia W. Muench [MacNeil].”

In describing the second obverse model, a cast bronze bas-relief made from MacNeil’s approved model for the 1916 Standing Liberty quarter, Burdette writes, “It was plated with nickel or similar metal. Liberty is walking forward through a plain gate or portal. She holds a partially uncovered shield in her left hand; her right hand holds the end of a sash inscribed IN GOD WE TRVST. To left and right are branches of laurel, symbolic of triumph; below each is a dolphin symbolic of the Atlantic and Pacific oceans. At the rim and encompassing all is a cable or chain design emphasizing unity and strength. The graceful figure is in medium relief with somewhat soft modeling to her gown. Lettering is in strong relief, somewhat smaller than on the previous design. Motto letters are incuse and thin on the sash connecting hand and shield. Shield has 13 stars exposed surrounding an eagle. Artist’s initial (M) appears below the dolphin on the right.”

The bronze bas-relief has an inner diameter of 130 millimeters, with an irregular border of approximately 11 to 13 millimeters. It is 4 millimeters thick at its greatest point and weighs 358.64 grams.

Burdette writes that while one bronze cast of this type was sent to the Philadelphia Mint, he speculates that this example remained in MacNeil’s College Point, N.Y., studio, as “a backup in case the first one were lost or damaged.”

As for the bronze cast model for the reverse, Burdette states that it is the “only known cast example of any of MacNeil’s reverse designs.” He points out that the only difference between the bronze model for the reverse and the reverse plaster model is that the motto E PLVRIBVS VNVM is above the eagle, but that the final three stars are not positioned below the eagle as they are on the final version of the Standing Liberty quarter dollar reverse.

In the June 14, 2004, Coin World article documenting the discovery of the bronze models, Paul Gilkes wrote that the pieces first came to light after being purchased at a New Jersey garage sale by an anonymous collector in 2001.

Gilkes wrote that the models are believed to be galvanos, one of the early steps used in the die production process at the time the Standing Liberty coinage was minted.

He describes a galvano as “a metal, larger-than-life model of one side of a coin, that was mounted on a reduction-engraving machine. The machine traced the design elements of the galvano with a stylus, reducing them in size through a series of gears, and cut an exact replica into the blank face of a piece of die steel to create the master hub. This hub was used to make the master die, which was used to make multiple working hubs. Each working hub made multiple working dies.”

The MacNeil lots will be offered the evening of Aug. 9 during the Stack’s Bowers auction.