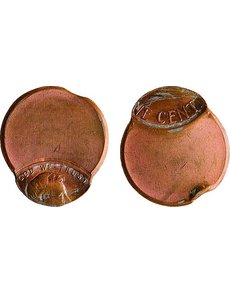 An off-center cent with a “sideneck strike.” Driven toward the northeast by the expanding die-struck portion of the coin, the unstruck edge collided with the side of the adjacent hammer die neck. 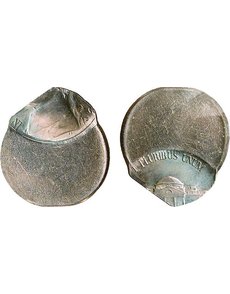 A flat contact facet is positioned opposite the base of Jefferson’s bust on this off-center 5-cent coin. The source of the facet is unknown. 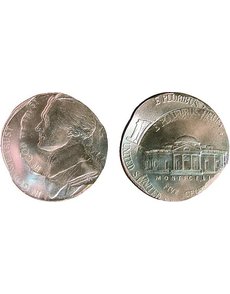 The right and left sides of this quadruple-struck 5-cent coin show edge damage that was generated during the strike. The long facet on the right may have been caused by contact with a feeder finger.

As a coin is struck, its expansion is abruptly halted by the surrounding collar.

When the collar fails to deploy, a coin expands in all directions. As a result, all off-center strikes and broadstrikes are wider than a normal coin, to varying degrees.

On some occasions a coin’s expansion is impeded, and the edge damaged, by machine parts positioned above the collar plate.

The most familiar obstacle to unfettered expansion is the neck of an adjacent hammer die. In a dual or quad Bliss press (the last of which was retired in 2005), the close proximity of adjacent die pairs results in the occasional production of a “sideneck strike,” also referred to as an “almost saddle strike” or a “one-die saddle strike.”

A typical example is shown here in an off-center Lincoln cent. At the pole opposite the 1 o’clock position of the obverse face, we see a deep, concave notch and an associated pressure ridge. The planchet represented by this coin lay partly within one striking chamber and almost managed to encroach on the adjacent striking chamber. In other words, the coin fell just short of becoming a “saddle strike.” When struck, the expanding die-struck area pushed the unstruck portion toward the adjacent striking chamber. It collided with the side of the hammer (obverse) die neck as the latter was striking its own coin.

Strike-related edge damage of another kind is seen in an undated Jefferson 5-cent coin. The pole opposite the off-center strike has a flat, vertically oriented contact facet. It appears that the facet was produced when the unstruck portion of the planchet was pushed south by the expanding die-struck area and collided with a machine part. Another possibility is that the coin was hit while momentarily immobilized by the two dies.

In either case, we can’t be sure what machine part was responsible, although I suspect a feeder finger. I’ve encountered these flat facets on quite a few off-center and double-struck cents and 5-cent coins. In each case, the strike is about 70 percent off-center and the contact facet lies opposite the base of the bust.

The introduction of the Schuler press introduced new types of strike-related edge damage. This press uses a single die pair, with the reverse die operating as the hammer die. The damage is primarily associated with multi-struck coins. A representative example is provided by a quadruple-struck 5-cent coin. The first strike was normal. The other strikes were delivered about 20 percent off-center and are closely spaced. Edge damage is present on both the right and left sides. The contact facet on the right side is convex, slightly beveled, and extends from 12 o’clock to 2:30.

The dies evidently struck whatever machine part rested against the coin. On the left side the coin buckled when it collided with a hard object. The contact facet here is quite compact and lies next to the w of we. It’s possible that the coin was pushed laterally into an obstruction by expansion produced by the off-center strikes. It’s also possible that an object hit the coin as the latter was temporarily immobilized between the dies.

This type of edge damage can be found on numerous multi-struck cents, 5-cent coins, and Washington quarter dollars struck by Schuler presses. The pattern is consistent, although the long facet and the short facet can be located on either the right or the left side.