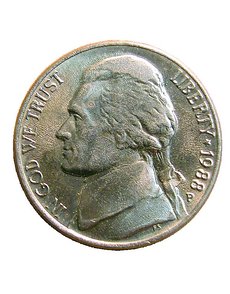 This 1988-P Jefferson 5-cent coin shows a sizable lump at the top of Jefferson’s head that represents a die subsidence error. 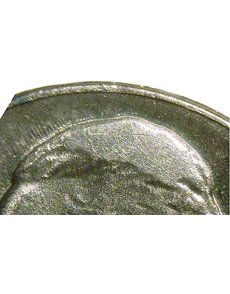 A close-up image shows the area where the die face receded on the first 1988-P Jefferson 5-cent coin reviewed. Note the loss of design. 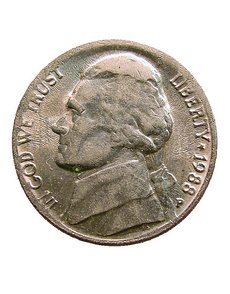 This very late die state 1988-P Jefferson 5-cent coin has a nearly identical die subsidence error as found on the first piece reviewed. It was struck by a different obverse die than the first. 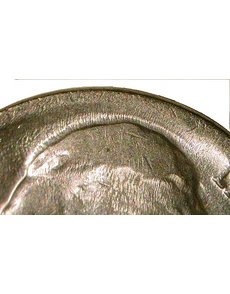 A close-up image illustrates the area where the die face sank in on the second 1988-P Jefferson 5-cent coin.

Collectors of minting errors and die varieties frequently encounter coins with one or more featureless lumps in the field or on the design. Determining the nature and origin of such lumps isn’t always easy.

The two 1988-P Jefferson 5-cent coins selected for this week’s column present such a diagnostic challenge. Each shows a large swelling with a smooth surface at the top of Jefferson’s head. The border of each swelling is fairly well-defined. The outlines of the two elevations are similar, but not identical.

However, a close comparison of the outlines of the two lumps revealed differences that could not be reconciled with progressive growth. Some fingers that extend out from the main body of the lump grow smaller from the earlier to the later die state. The border is also less clear in the later die state example. There are no common die markers; instead distinctive die markers on each example show that they were struck by different dies.

The lumps certainly weren’t interior die breaks. Although the border of each elevation was fairly well-marked, they didn’t show the clean, jagged lines of a die break.

They clearly weren’t die dents. It’s virtually unheard of for two near-identical die dents to form on two different dies (the “extra leaf” 2004-D Wisconsin quarter dollars are a notable exception). Die dents this large are exceptionally rare, and finding two of this size is highly improbable. Finally, we find emerging from each lump several narrow fingers that merge with the waves of Jefferson’s wig. A die dent would not coincide with or merge with the hair pattern.

The lumps are too large, too tall and the surfaces too smooth to represent die erosion pits. The latter sometimes form in late die states, leaving small “patches” or “blebs” on the coin’s surface. Die erosion pits are very flat, with a rough surface and highly irregular boundaries. They usually form in the field. They may be related to loss of carbon (“decarbonization”) from the surface of the die face.

These lumps clearly do not represent trapped gas bubbles (“occluded gas bubbles”). Such planchet defects tend to be quite small and the distribution pattern will be different on every coin.

The one remaining possibility was a “die subsidence” or “sunken die” error. Here portions of the die face deform and sink in as the result of defective die steel or faulty die preparation. Sometimes the design fades out or disappears completely in the affected area, an effect readily apparent on our two 5-cent coins.

Perhaps the wrong type of steel was accidentally selected and extruded into a rod from which the working dies were cut. Perhaps the steel wasn’t forged properly, producing abnormal levels of carbon in the alloy.

If the steel was of the proper type and was properly forged, then a flaw could have arisen during any number of steps in die preparation. Improper annealing, tempering and quenching can alter the crystalline structure of the steel so that localized soft spots are left just beneath the surface. These only become apparent after the die has been placed into service.

Since two different dies from the same Mint and the same year developed two nearly identical zones of collapse in the same area, this would point to a problem more widespread than a single working die. Perhaps the dies were cut from the same defective rod of die steel, or were prepared by the same technician under the same faulty conditions. Since the lump is well-developed in a die that doesn’t show particularly heavy wear, it’s clear that this abnormality represents something other than normal die deterioration.

Sunken die errors are highly variable in shape, size, relief and location. While usually localized, the problem can affect the entire die face. In many cases the margin of the sunken area develops cracks, and some of the best examples straddle split dies.