Low grade no impairment for 1878-S Seated Liberty half dollar 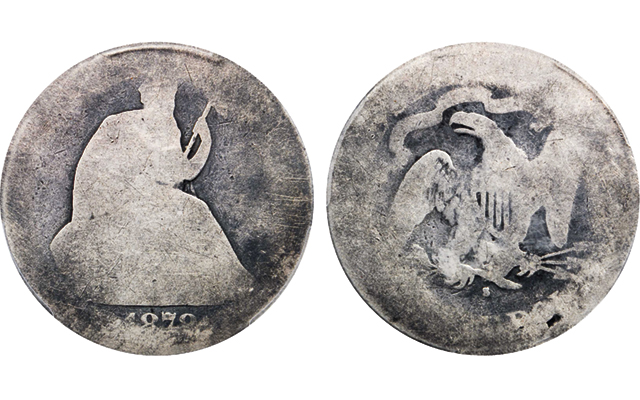 Despite only being graded Fair 2 by Professional Coin Grading Service, collectors of Seated Liberty half dollars still need an example to complete a collection.

The auction is being held at the Whitman Baltimore Coin and Collectibles Expo June 26 to 29 at the Baltimore Convention Center.

Struck from the only known pair of dies, the offered WB-1 variety, as cataloged in the Complete Guide to Seated Liberty Half Dollars by Randy Wiley and Bill Bugert, is one of perhaps 50 to 60 examples known today from a reported mintage of 12,000 coins.

Coin World’s Coin Values and Collectors Universe list the value of an About Good 3 example at $25,000.

The Stack’s Bowers auction lot description suggests the low mintage of 1878-S half dollars is likely the result of most of the mintage being shipped overseas and subsequently melted. The U.S. Mint’s demand for smaller denomination coins dropped sharply after passage Feb. 28, 1878, of the Bland-Allison Act.

The act required the purchase of large quantities of domestically mined silver that was required to be struck into dollars. Millions of Morgan dollars were struck in 1878 as a result.

The splasher features, on a hexagonal piece of white metal, an obverse impression of the obverse of Judd 189, but without the date.

A die trial is an impression from a working die with incuse features, resulting in a trial piece with the features raised, or in relief, as on a regular coin, according to the Judd reference. A splasher is an impression on a very thin piece of metal, often white metal or lead.

Such die trials are produced for several reasons, including to check the progress on a design being engraved.

Judd 189 is the catalog number assigned to the 1857 Coronet $2.50 quarter eagle pattern. Of the four Judd-A1857-3 examples known, two are in the Library Company of Pennsylvania, according to the Judd reference.

The example being offered in the Stack’s Bowers Galleries auction is graded PCGS Secure Mint State 65.