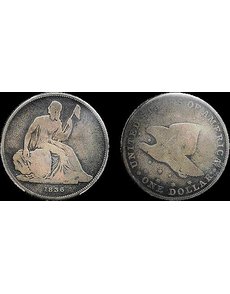 A market nearly always exists for low-grade examples of otherwise pricey coins. For example, Ira & Larry Goldberg Auctioneers had in its recent pre-Long Beach sale, which closed Sept. 5, an 1836 Gobrecht dollar graded Proof 4 with an estimate of $3,000 to $3,300. It realized $6,083.

As the lot description notes, such a grade is popular because of its affordability.

The lot brings up a separate interesting point — that a coin can be heavily circulated but still Proof since Proof refers to a method of manufacture.

That the coin was a limited issue that did not enjoy wide circulation leads one to suspect that it may have had a former life as a pocket piece.

At a Sept. 8, 2011, Heritage auction one bidder paid $8,625 for a Poor 1 1776 Continental dollar in pewter. The lot description said it all: “What collector wouldn’t want a Continental dollar? Although little detail remains, enough is visible for positive identification and authentication.” It also noted that there are “many collectors forming type sets of coins with the lowest possible grade.”

For further proof of this, one can look at the current healthy market for exceedingly common coins in problem free, very low grades.

Grading services will certify and grade coins Poor 1 if they don’t have a visible date but are identifiable since they were only produced for one year. A great example of this is the 1793 Flowing Hair, Chain cent. While the date may wear off, the chain on the reverse keeps its form even in the lowest grades. In 2009 one graded Poor 1 by PCGS realized $1,725 at auction.

One collector who has posted a set in the PCGS Registry as “Jimmy Austin’s Best of the Worst” has put together a 96.43 percent complete year set of low-grade Morgan dollars with an average grade of 1.527. The set lacks only the 1898 coin, but notes that the Fair 2 1883-CC dollar is a “possible downgrade candidate.” ¦