Looking forward, and back 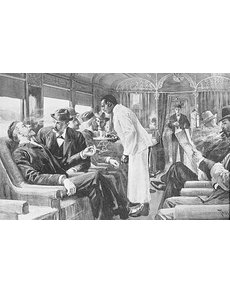 Harper’s Weekly shows a smoking car on the Chicago Limited train — the way that most attendees traveled to the first ANA convention in Chicago in 1891. Smoking cars were reserved for men. Other accommodations for a first-class ticket could include drawing room, parlor and Pullman sleeping cars.

In recent columns, I have told about my very first American Numismatic Association convention, in Omaha, Neb., in 1955. The bourse was limited to 40 tables, which cost $50 each and including a banquet ticket!

The ANA could not fill the space, so they issued a plea for more dealers to sign up. At age 17, I was not old enough to be an ANA member, but Lewis M. Reagan, ANA general secretary, let me have a table, backed by my father guaranteeing my transactions.

In 1955, at the last day of the Omaha show, an announcement was made on a speaker in the Grand Ballroom — center for the bourse and exhibits, to the effect, “Ladies and gentlemen: We are proud to announce that our attendance has just crossed the 500 mark, an all-time record!”

Now imminent is the 2011 World’s Fair of Money, plus an official pre-show as well, with well more than 400 bourse tables sold and bourse prices about 20 times what they cost in 1955. This will be my 57th year — a record for any dealer in ANA history. With me will be my grandson, John Bowers, age 15, who in June had a dandy time attending the grading course at the ANA Summer Seminar in Colorado Springs, Colo.

John, now a part of the Young Numismatists group in the ANA, didn’t have to wait until age 18 to join. Last year, John was at the ANA show as well.

Until this year, the annual show bopped around the country, but the ANA Board has frozen the location as Chicago (Rosemont, Ill.) for the next several years (Philadelphia in 2012, back to Rosemont for 2013 and 2014). We all hope that the venue will prove to be dynamic.

The ANA was founded in Chicago in November 1891. Getting there in 1891 typically involved a train trip, often for a day or two or three, depending on the distance. This was often a very pleasant experience. I won’t compare this to today’s airline travel!

I’ll remind myself to write about some other conventions in future columns. Probably the most active for me was the 1957 show in Philadelphia — where customers waited in line at my table, sometimes a half dozen to 10 people, waiting their turn to buy or sell.

Back then a lesser number of bourse tables meant more activity for all dealers. The pokiest recent show was 2009 in Los Angeles — a surprise as California is super active numismatically. Sometimes, dealers would chat idly for an hour, waiting for a customer to appear at the 2009 show.

Last year, in Boston, was very good. And so it goes.