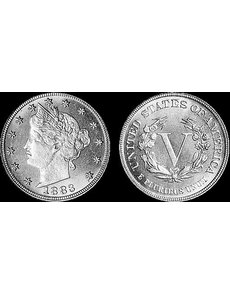 The first version of Liberty Head 5-cent coin, new on the scene in 1883, represented the denomination simply as the Roman numeral V on the reverse.

In 1878 the American Publishing Company released The Gilded Age: A Tale of Today, a humorous reflection of life in America, by Mark Twain (Samuel L. Clemens) and Charles Dudley Warner.

If there was ever a true Gilded Age, it was in the 1880s. By that time, the Civil War, Reconstruction in the South, the Panic of 1873 and other events were history. The country was prosperous.

All crows became swans, all dandelions roses, or so it seemed. To be sure, improvements could be made, such as in labor, but even those with low incomes had more pleasures than ever before.

In early 1883, the U.S. Mint introduced a new design for the copper-nickel 5-cent coin. The shield motif was replaced by a classic portrait on one side and on the other an inscription, including the Roman numeral V to indicate the denomination.

Within a short time, sharpsters hit upon the idea of gilding the new 5-cent coins and, in some instances, having a machine shop add reeding to the edge. For all intents and purposes, the result was a sparkling new gold $5 piece!

Typically, such a coin would be offered without comment for the purchase of a 5-cent item, such as a cigar, candy, soft drink, or magazine. An unsuspecting shopkeeper would return $4.95 in change.

This caused a great consternation within the Treasury Department, and agents were dispersed nationwide to find and arrest the miscreants. The design was soon changed to add the CENTS to the reverse inscription.

Word spread that the No CENTS 5-cent coins would be called in and would attain great value. Millions were hoarded.

Today, the No CENTS subtype is the commonest in Mint State of any Liberty Head 5-cent coin from 1883 to 1912, never mind that many have vastly larger mintages!

The change in design and the public attention it gained gave numismatics the greatest boost it ever had up to that time. Within the decade, the number of collectors multiplied, Proof coin production reached record levels (not to be reached again until 1936), and several magazines were launched, including The Numismatist.

Indeed the Gilded Age was golden in more ways than one!