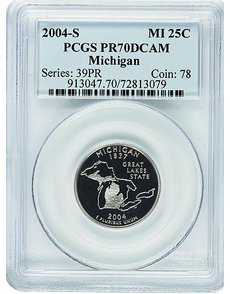 Author Robert C. Gallagher once somewhat famously wrote, “Change is inevitable – except from a vending machine.”

With that same spirit, the monthly column “Inside Collecting,” which I’ve penned since 2007, next month is making way for a new column looking at modern United States coins, both circulating and noncirculating.

In an early “Inside Collecting” column, I discussed collecting in the framework of being the “king of hobbies.”

I defined a numismatist as “a consummate scholar with a keen mind and a discerning eye, a keeper of art and history for future generations,” and observed that as numismatists we are part of a fraternity that transcends national borders and generations.

Collectors of modern coins share many commonalities with aficionados of more “traditional” series like Morgan dollars or Seated Liberty coinage. By applying traditional elements of connoisseurship and value, “Making Moderns” will help try to explain the sometimes mysterious field of advanced modern coin collecting that is enjoyed by tens of thousands of Coin World readers.

“Inside Collecting” addressed connoisseurship and the direct connection of coins with art and history. While some who collect “traditional” coins may scoff at what they see as “modern madness,” a robust and healthy market exists for modern coins, and thousands of collectors enjoy sharing their collections online in registry sets organized by Professional Coin Grading Service and Numismatic Guaranty Corp.

Modern coins often have wonderful stories behind them, their enabling legislation a battle of competing interests, and the resulting coins are often the product of multiple compromises.

Modern coins also tie into the story of today’s rare coin market, third-party grading, the explosion of collecting on the Internet and the growing accessibility of collecting from pocket change with the State quarter dollars series.

“Inside Collecting” dealt with the deep understanding that comes from the close examination of coins in one’s collection, the diminutive size of coins allowing a collector to savor and understand every millimeter of his or her coins.

Perhaps in no field is that close examination better-suited than with modern coins, where the difference between a Proof 69 coin and one grading Proof 70 – and hundreds or even thousands of dollars – is often nothing more than a tiny break in the frosted devices.

A minuscule tick. That’s all that separates a 1991 American Eagle silver bullion coin graded Mint State 69 from one graded MS-70; yet one sells for $35 on eBay and the other sells for $20,000 at a prestigious auction house.

Why? We’ll explore this in February.

STEVEN ROACH is associate editor of Coin World. E-mail him at sroach@coinworld.com.