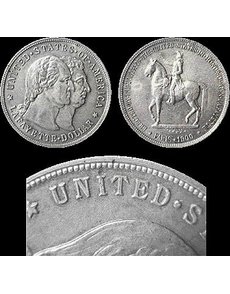 Some minor doubling appears at the tops of the letters in UNITED, which does not occur on genuine 1900 Lafayette dollars. Most significantly, the fake does not exhibit any raised die polish lines in the fields.

Counterfeit coins the size of a silver dollar are becoming more sophisticated every year, especially the fakes that are being produced in Asia.

The fake 1900 Lafayette dollar shown here is a rather deceptive counterfeit that could fool many collectors.

While a number of diagnostics can be used to detect this fake, most of them would be difficult to identify at a coin show, and all of them would be a problem if you are considering the purchase of a Lafayette dollar via online auction, even with above average images.

Even though the diameter and thickness of the counterfeit are normal, the coin weighs a tiny amount more than it should – 26.95 grams, versus 26.73 grams for a genuine U.S. silver dollar.

It is unlikely that every fake from these dies will be similarly overweight — it is more probable that the counterfeiter was not precise with the weight of the blanks.

These fakes could theoretically fall into a range between 26.5 grams and 27 grams.

The lettering on the fake is slightly rounded, with microscopically concave centers on some of the letters.

The luster is dull and satiny, and the coin has a lifeless gray color. Unfortunately, this appearance is duplicated on many genuine Lafayette dollars that have been cleaned and retoned, so it is not a particularly useful diagnostic.

The edge reeding on the fake is sharper than on a genuine example, probably due to the counterfeiter using a new edge collar and higher striking pressure.

There is some minor doubling at the tops of the letters in UNITED, which does not occur on genuine pieces.

Most significantly, the fake does not exhibit any raised die polish lines in the fields.

If you inspect a number of genuine Lafayette dollars in higher grades, you will notice that all of them have numerous die polish lines, usually curved and overlapping.

We have noticed that the 1900 Lafayette dollar has been specifically targeted by counterfeiters over the past 10 years, so collectors should be very wary when considering the purchase of a noncertified specimen.