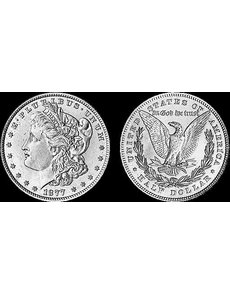 Do you recognize this design? It is an 1877 pattern half dollar designed by U.S. Mint Engraver George T. Morgan.

When you acquire a coin, token, medal or bank note, take time to study it carefully. This is the quintessence that you’ve paid for.

Last year I wrote about the 1783 Georgivs Triumpho copper. The image is of King George III, but what was he “triumphant” about in 1783, the year that England officially capitulated by treaty to the new United States of America? If anything it was our George — Washington, that is — who was triumphant. And the reverse of this coin: What do the motifs mean?

More has been said about it and more has been speculated in the pages of The Colonial Newsletter, The C4 Newsletter, and in various auction catalogs and Internet postings than for any other token of its era.

You probably don’t have a Georgivs Triumpho copper — but if you are intellectually inclined and like a challenge you might track one down. Hundreds exist.

As Yogi Berra famously said, “You can see a lot by just looking.”

You probably do have a Morgan silver dollar. Have you ever looked at it carefully?

If not, why not do so between now and next week? In my next column, I will share some of my “through the looking glass” ideas about the dollar. So, be prepared.

Morgan made several patterns. The one most closely related to the later Morgan dollar is shown above.

Another of Morgan’s 1877 pattern designs lived on — the eagle perched on a Roman standard. In 1879 the engraver used it as the reverse motif for the beautiful Schoolgirl pattern silver dollar.