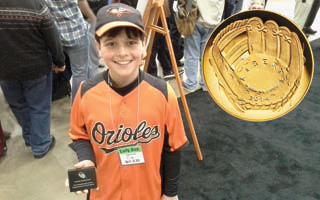 Twelve-year-old collector and Baltimore Orioles fan Cole Bank was the first in line to buy a Proof 2014-W Baseball gold coin March 27 at the Whitman Baltimore Expo. The coin shown is representative, but not the coin Cole purchased. 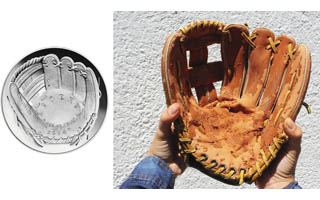 California artist Cassie McFarland, who used a childhood baseball glove as the inspiration for her winning common obverse for the Baseball coins, donated the glove, shown, to the National Baseball Hall of Fame March 27.

The three-coin 2014 program is proving popular with collectors, with more than 80 percent of the gold $5 half eagles authorized reported sold during the first 12 hours of sales March 27.

Buyer of the first coin at the U.S. Mint booth at the Whitman Baltimore Expo was young fan and collector Cole Bank from Vienna, Va., who was first in line at the Mint’s booth.

The total combined maximum authorization of gold $5 half eagles in Proof and Uncirculated is 50,000 coins.

The enabling legislation calls for the maximum production and release of up to 400,000 silver dollars and 750,000 copper-nickel clad half dollars.

The sales totals reflect coins sold at the Mint website, by telephone, at the Whitman Baltimore Coin & Collectibles Expo, and at the U.S. Mint Sales Center at Mint headquarters in Washington, D.C.

The commemorative coins were especially a hit with collectors attending the Whitman Baltimore Expo.

Tom Jurkowsky, director of the U.S. Mint’s Office of Corporate Communications, said the average waiting time to buy coins at the show was two hours or more.

Numismatist Q. David Bowers confirmed that “the crowd of buyers in line to make purchases at the U.S. Mint sales display extended partway across the bourse floor, across the lobby of the Baltimore Convention Center, and into the street!”

Twelve-year-old Cole Bank from Vienna, Va., was first in line to buy a Proof 2014-W National Baseball Hall of Fame gold $5 half eagle at the expo.

Cole had J. Marc Landry, acting associate director for sales and marketing and the plant manager at the Philadelphia Mint, autograph the coin’s accompanying certificate of authenticity and attest to the coin as being the first sold.

Cole turned down a number of offers from dealers seeking to buy the coin as the first sold by the U.S. Mint. The coin was purchased for the introductory price of $424.75.

Later in the day, Cole was able to get his picture taken with Brooks Robinson, Hall of Fame third baseman for the Baltimore Orioles. Robinson, who was one of five Hall of Famers who helped in the review of proposed coin designs for the common obverse, attended the Whitman Expo after another coin launch event on Capitol Hill with Hall of Fame second baseman Joe Morgan.

Another young collector, 12-year-old Charlie McLaughlin from Arlington, Texas, was third in line at the U.S. Mint Sales Center in Washington, D.C., to buy the Baseball coins. Charlie, who accompanied his dad on a business trip and just happened to walk by the sales center, purchased one each of the Proof and Uncirculated 2014-P Baseball silver dollars.

During coin launch ceremonies on Capitol Hill at 11 a.m. EDT March 27, California artist Cassie McFarland, represented by U.S. Treasurer Rosie Rios, donated to the National Baseball Hall of Fame and Museum the childhood baseball glove she used as inspiration for her winning common obverse for the Baseball coins.

Jane Forbes Clark, chairman of the National Baseball Hall of Fame and Museum, said the glove would immediately be placed on display at the museum.

Anticipating heavy demand, the U.S. Mint invoked the use of its “waiting room” feature on its website at www.usmint.gov to prevent the possibility of the website crashing. The feature allows collectors to be placed into an ordering queue in the order in which they signed in online to buy the coins.

The online waiting time for Mint customers varied depending on the time of day when logging into individual customer accounts.

Two Coin World staff members had signed into their Mint customer accounts soon after the start of work at 8 a.m. EDT, four hours before the start of the sales of the Baseball coins online and by phone.

Two other Coin World staff members signed into their accounts later in the morning, but before the Mint blocked access to the entire website at 11:45 a.m.

Once sales went live at noon, the first two Coin World staff members who had logged into the Mint’s website waited less than 10 minutes, while the waiting time for the other staff members was an hour or more.

Jurkowsky said the waiting room feature worked well to meet the demand, despite some opinions of some collectors suggesting otherwise.

Participants at the Collectors Universe U.S. Coins Forum reported a range of experiences.

Some said they were able to enter the waiting room and then quickly move to the Mint catalog, where they completed their transactions for the coins in minutes.

Others reported long waits in the waiting room, and some saw their “Estimated Wait Time” increasing rather than decreasing. Some Mint customers found that as their time finally arrived to be redirected to the Mint catalog, they instead were sent back to the waiting room, where they had to click on the “Enter Waiting Room” button again before they were finally redirected to the catalog.

Jurkowsky said the U.S. Mint’s plans to introduce a completely new Order Management System to replace the current system, which is more than a decade old, is on track for implementation this fall.