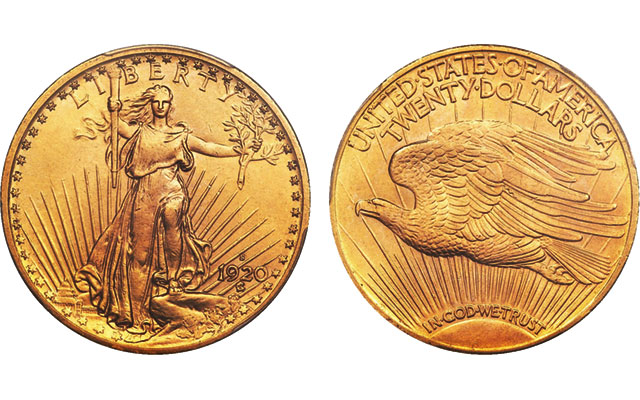 Just missing the six-figure mark was a 1920-S Saint-Gaudens double eagle graded MS-64 by Professional Coin Grading Service that sold for $99,875. At 558,000, the mintage for the issue is deceptively high, as the vast majority was melted after President Franklin Roosevelt’s gold recall. Many of the Saint-Gaudens double eagles that escaped the melting pot made their way to Europe. However, Heritage notes, “Unlike some of the rarities of later years in the decade, the supply of 1920-S twenties has not been augmented by hundreds or thousands of recent imports.”

In estimating the number of known examples, Heritage cites Q. David Bowers’ estimate of 45 to 60 in circulated grades and another 40 to 60 in Mint State. PCGS estimates 100 to 150 pieces known in all grades. PCGS and NGC population reports show 167 submissions for this issue across all grades, although this number is surely inflated by resubmitted coins, where the same coin is submitted multiple times and all its submissions appear separately on population reports.

The majority of the known Mint State examples are graded MS-62 to MS-64, and Heritage notes, “Better-grade Mint State examples were almost certainly obtained at the time of issue by collectors who had close ties to Mint or other government officials.” Although this issue is infrequently offered, a different example graded PCGS MS-64 brought $111,625 in Stack’s Bowers Galleries’ August 2014 American Numismatic Association auction and Heritage sold a PCGS MS-63 representative in its recent Florida United Numismatists sale where it brought $70,500.