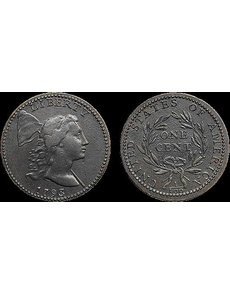 February was a busy month for coin auctions, with both Larry & Ira Goldberg Auctioneers and Heritage Auctions holding major sales prior to and during California’s Long Beach Coin, Stamp & Sports Collectible Expo, held Feb. 7 to 9.

In total, the two firms’ February Long Beach auctions realized more than $28 million, allaying some doubts in the coin market about the viability of the thrice-yearly Long Beach Expo as a successful auction platform.

Leading the Goldberg auctions was the Paul Gerrie Collection of Large Cents, 1793 to 1814, which realized $3,681,668 across 83 lots. In total Goldberg’s various pre-Long Beach auctions of U.S., world and ancient material realized just over $18.3 million with a strong 93 percent sell-through rate by lot.

Heritage’s Long Beach auctions realized more than $9.7 million with an 88.3 percent sell through rate by lot.

The Heritage auction showed that the market for top modern rarities continues to sizzle. For example, a 1986 American Eagle silver bullion coin graded PCGS MS-70 realized $21,150 and a 1992-D Lincoln cent of the Close AM design (a distinct and rare reverse subtype) graded MS-65 red by PCGS brought $13,512.50.

Exceptional rare coins from ancient to modern continue to bring strong prices at auction, perhaps buttressed by recent mainstream attention that has been paid to the rare coin market in the wake of the $10 million sale of a 1794 Flowing Hair dollar.

For those who missed the chance to take home a great large cent from the Gerrie Collection, Goldberg is planning to offer “The Missouri Cabinet,” which it touts as “the only complete collection of U.S. half cents ever formed” with “every business strike variety and every proof variety” included. The collection has around 300 coins, most being the finest known, and will be offered in February 2014. ¦