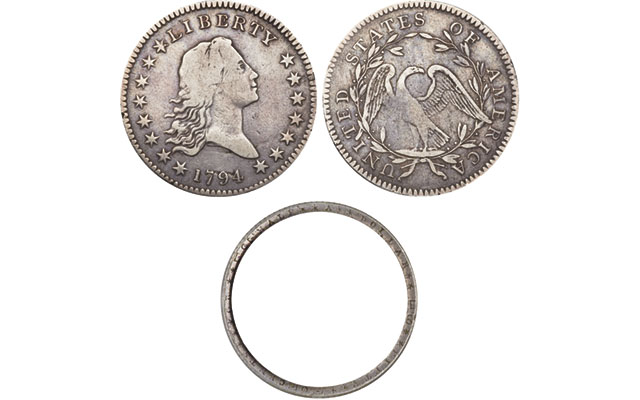 The only known example of the Overton 109 variety of 1794 Flowing Hair half dollar struck in silver will appear at auction for the first time in April. The image below shows the edge inscription of the coin.

The only known example of the Overton 109 die marriage of the 1794 Flowing Hair half dollar in silver is headed to auction.

After decades off the market, that coin will cross the auction block for the first time during Heritage Auctions’ April 22 to 27 sale. The auction is being held in conjunction with the Central States Numismatic Society 76th Anniversary Convention in the Chicago suburb of Schaumberg, Ill.

The silver coin in the CSNS auction was recently graded Very Fine 25 by Numismatic Guaranty Corp.

The 1794 silver half dollar variety is part of the Liberty U.S.A. Collection, Part II, originally assembled by numismatist and author Robert P. Hilt II, and has been kept off the market until now.

Until the silver version was reported late in the 20th century, “This die pair was previously known only in the form of two copper impressions; one of which is housed in the Smithsonian Institution, and the other in a museum in Vienna, Austria,” said David Mayfield, vice president of coin consignments at Heritage. “It is an incredible rarity and one that sets the stage for what we think will become a very successful auction event in Chicago.”

The copper pieces are die trials — pieces struck from production dies in the wrong metal (copper, for example, instead of silver). The copper trial pieces were likely struck to test the dies.

The unique silver O-109 1794 Flowing Hair half dollar, according to Heritage, was unknown to numismatic researcher Al C. Overton for inclusion in the 1967 first edition or 1970 second edition of his reference Early Half Dollar Die Varieties 1794-1836. Hilt initially described and illustrated the silver example of the O-109 die marriage in his 1980 work, Die Varieties of Early United States Coins.

A die variety or marriage is the pairing of two specific dies, obverse and reverse.

According to uspatterns.com, the Austrian museum copper die trial was discovered in July 2004 in the Kunsthistorisches Museum in Vienna, having been gifted to the museum in 1920 by an S. Schwarz.

Hillery York, a collections specialist for the National Numismatic Collection in the Smithsonian Institution, says the O-109 half dollar copper die trial in the NNC was donated in 1976 by Benjamin, Harvey and Norman Stack.

The edge of the Smithsonian’s copper die trial has only the letters OLLA legible from FIFTY CENTS OR HALF A DOLLAR, the other letters having been worn off, York says.

The edge die used on the copper die trial in the Austrian museum appears to replicate the ornamentation seen on the edge of the unique silver 1794 Flowing Hair, O-109 half dollar.

After seeing an image showing the edge of the silver version of the O-109 coin, Bust half dollar specialist Bradley Karoleff says the edge appears to be slightly blundered with overlapping symbols at the beginning/end of the inscription.

The rectangles with lines in them, represented by brackets and the hyphens in the description, and the small circles with dots in them are ornamental figures, Karoleff said.

The edge devices were incused, using a Castaing machine.

According to Professional Coin Grading Service, the Castaing machine “imparted edge lettering to blanks before striking. It consisted of a bench fitted with parallel bars each containing half the edge lettering, set apart minutely less than blank diameter, spring-mounted, one fixed, the other set to move forward while remaining the same distance from the fixed bar, actuated by gears and long handle. Each blank was caused to go through this machine, ideally without slipping, though in practice slippage accidents were frequent, producing blundered inscriptions (overlapping). More rarely, a lettered blank would be run through a second time.

“The Castaing machine became obsolete with introduction of the close collar,” notes the PCGS.