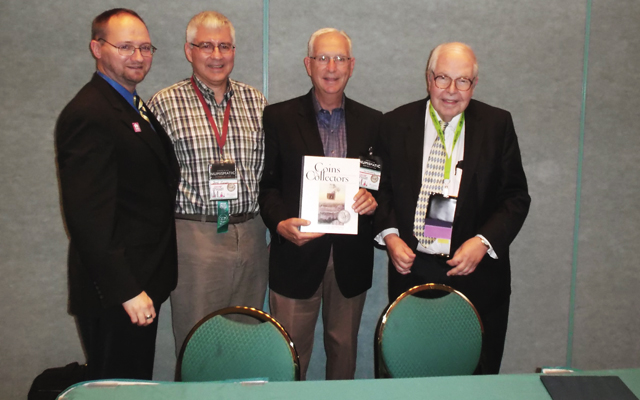 On two consecutive days this August, thanks to the Numismatic Bibliomania Society, I came face-to-face with a living numismatic legend, two powerful publishers, and many quality literature collectors.

Leading off the NBS Symposium, on Aug. 7, was the legendary Dave Bowers, who has written more numismatic books than anyone else.

He was followed by the “Godfather” of coin literature, Dennis Tucker, of Whitman Publishing. He and Dave were both presenting on how to get your numismatic book or article into print.

They also unveiled the very first copy of Dave’s latest book, Coins and Collectors: Golden Anniversary Edition, published by Whitman. Dave suggested that we both sign the book (I was privileged to write its foreword), and then auction it to benefit the NBS.

Many a hand flew into the air; the last hand standing belonged to “the collector’s collector,” Dan Hamelberg, enriching the Numismatic Bibliomania Society by a whopping $1,500!

On Aug. 8, at the NBS annual meeting, Dan brought a display of treasures from his matchless library, easily the finest American numismatic literature collection ever formed.

Among them was a printed copy of the Congressional Act of April 2, 1792, which created the United States Mint, boldly signed by Thomas Jefferson.

Dan gave a fascinating talk about these documents, highlighting some little-known facts about the 1792 Mint Act. For example, if an employee was caught debasing the coins of the United States, the penalty was death!

Wayne Homren, the founder and publisher of the NBS’s electronic newsletter, The E-Sylum, discussed the past and future of online numismatics.

The past was a hoot: remember when a modem was an actual telephone receiver fitted into a special cradle enabling connection with a mainframe computer?

Wayne also discussed early efforts by coin dealers and collectors to get online; one of the pioneers was the NBS website, which he hand-built in the early 1990s.

The future will feature Wayne’s latest project, CoinLibrary.com, which will be the one-stop destination for numismatic knowledge on the Web, with curated content, so that only relevant results will be included, and offering private information to be found nowhere else.

If this all sounds like your kind of fun, then head over to the NBS website at www.coinbooks.org, and follow the instructions to apply for membership.