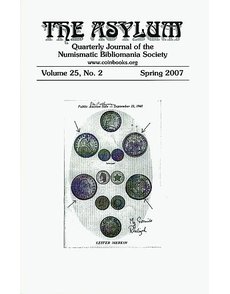 The Asylum, quarterly publication of the Numismatic Bibliomania Society, has both entertained and angered.

Typing “The Asylum” into an Internet search engine will provide many different results. One link, however, excites the numismatic literature lover, for The Asylum is also the official journal of the Numismatic Bibliomania Society.

As the wry name implies, it is a refuge for coin literature nuts. How nuts? Consider the “coprophagist” controversy. In the Fall-Winter 1980 issue, Walter Breen contributed “A Review of the Half Cent Literature,” which, editor Jack Collins noted, did not discuss any literature created after 1966. In the next issue, Roger Cohen, the author of American Half Cents: The Little Half Sisters, charged that Breen’s article did cover half cent literature published after 1966, but not his book, which he accused Breen of ignoring. Cohen then blasted Collins as “a liar and a bigot,” and concluded: “The editor belongs to the depths. He should be there also as a coprophagist.” (I would define “coprophagist,” but Coin World is a family-friendly publication.) Breen responded that he had edited his article in 1972, before Cohen’s book was published. Collins’ response was more concise: “In my opinion, American Half Cents is what a coprophagist would wrap his lunch in.”

Usually, The Asylum’s fireworks do not require consulting a dictionary. When in 1994 Charles Davis referred to a column written by the American Numismatic Association’s president as “one of the more nauseating articles we have read recently,” the antipathy was unmistakable.

Literary barroom brawls make The Asylum a fun read, but it is also a research source. Did you know that the legendary 1794 coins acquired at the U.S. Mint by the shadowy “Lord St. Oswald” could not have been collected by that gentleman? Mike Hodder, in the Fall 1994 issue, revealed that the St. Oswald title did not exist in 1794.

The Summer 2000 issue contains “Missing Masterpieces,” about the dozens of coin books and catalogs known to have existed in the 19th century that have inexplicably vanished. For example, 10 large format copies of Numisgraphics, Emmanuel Joseph Attinelli’s classic on American coin auction catalogs, were printed in 1876, and four were sold by 1878. Not one is known to exist today.

Len Augsburger published the findings of a survey of NBS members titled “The One Hundred Greatest Items of United States Numismatic Literature” over two issues in 2009.

The Asylum also provides light-hearted fare. If you read Q. David Bowers’ “Some Reminiscences” in Summer 2004, you would know which NBS member worked on a project to dispense spinach from a spray can.

The Asylum has just completed its 29th volume, under the talented editorship of David Yoon. How talented? John W. Adams once described an Adm. Vernon medal in which the admiral was wearing a toga. Yoon corrected “toga” to “paludamentum.”

The Asylum is one of the best bargains in numismatics, with a yearly NBS membership for $15 (www.coinbooks.org).