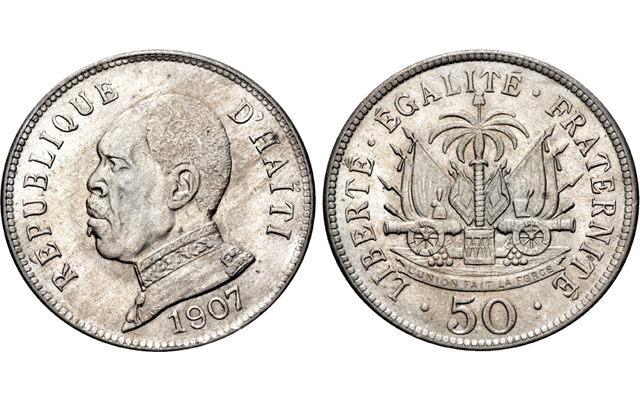 In 1907 Scovill Manufacturing secured the contract to produce 20- and 50-centime coins for Haiti. A Mint State 65 example graded by NGC is part of the Richard Lissner Collection and estimated at $75.

Printed catalogs are available for purchase. A digital edition may be viewed at the CNG website.

Coin World is highlighting three issues that combine condition, rarity and history. Below is the final piece.

Scovill strikes coins for Haiti in 1907

In 1907, Scovill Manufacturing of Waterbury, Conn. was called upon to produce coins for a nation on the island of Hispaniola, Haiti, years after striking coins for the Dominican Republic (below).

The company struck 20- and 50-centime coins in 1907, and the latter denomination again in 1908. The relationship between Haiti and Scovill had begun with the striking in 1904 of 5-centime coins.

The 1907 coins show President Pierre Nord Alexis on the obverse, and the coat of arms on the reverse.

A reported mintage of 2 million 50-centime coins were produced.

The 50-centime coin measures 29 millimeters in diameter, or slightly less than the American half dollar (30.61 millimeters).