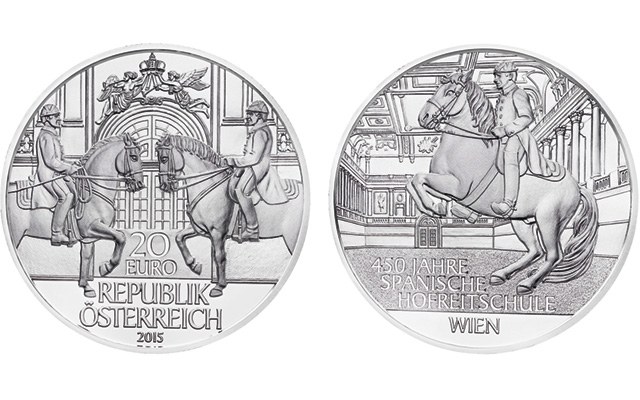 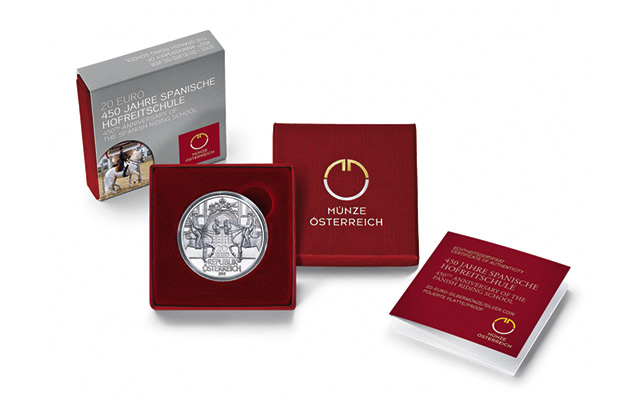 The 2015 Spanish Riding School Special Uncirculated silver €20 coin from the Austrian Mint is packaged in a capsule that is boxed with a certificate of authenticity.

One of Vienna’s most famous exports is Spanish.

The Austrian Mint announced Jan. 12 that a 2015 commemorative coin, due for release Feb. 18, will honor the Lipizzaner stallions and the place where they train, the Spanish Riding School.

The Spanish Riding School, headquartered in Vienna and located in the Imperial Palace complex in the heart of the city, was founded 450 years ago during the Renaissance period. The Riding School is the oldest institution of its kind in the world.

To mark the anniversary, the school and its pupils are honored on a Special Uncirculated .900 fine silver €20 coin.

The obverse of the coin depicts a pair of Lipizzaner stallions and their riders performing a pas de deux, which requires very high levels of concentration and coordination.

A portion of the winter riding school of the Imperial Palace complex is shown in the background, including details of the classic baroque building designed by Joseph Emanuel Fischer von Erlach and built between 1729 and 1735.

Above one of the hall’s windows, sculptured in wood and plaster, is the Imperial Crown of the Austro-Hungarian Empire, recognizable from the double-headed eagle looking east and west, holding ribbons in its beak.

The reverse depicts a stallion and rider executing a levade, one of the school’s equestrian inventions, in which the stallion puts its entire weight on its hind legs and raises its front legs no more than 45 degrees. The ceiling of the performance hall and some of the columns and railings are also visible.

The words 450 JAHRE SPANISCHE HOFREITSCHULE, translating to "450 years of the Spanish Riding School," are superimposed over the earth floor of the performing hall.

The iconic whitish-grey Lipizzaner stallions and their riders perform in 70 classical performances every year and regularly tour in European cities such Paris, London, Berlin and Brussels, among others.

The Hapsburg Imperial family developed the Lipizzaner breed during the Renaissance period to meet the military's need for agile light horses.

Lipizzaners are the result of a Spanish horse being crossed with Iberian mares, reflecting a time when the Hapsburgs controlled Austria as well as Spain.

The Lipizzaners are born with dark colored coats that become light grey by the time the horses reach the ages of 6 to 10 years.

Some 70 Lipizzaner stallions serve in the riding school, along with 20 riders, of which only two have the “chief rider” designation. Each year some 300,000 visitors attend their performances.

The legal tender coin weighs 20 grams and has a diameter of 34 millimeters.

The coin is limited to a mintage of 50,000 pieces. Each coin is encapsulated and boxed with a sleeve and an individually numbered certificate of authenticity.

Collectors in the United States and Canada may purchase the Lipizzaner coin directly from the Austrian Mint or from coin dealers worldwide. The issue price has not been announced.

American Precious Metals Exchange is an official distributor for the Austrian Mint, as is Downies.