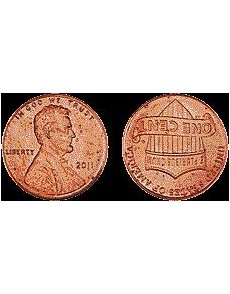 A 2011-D Lincoln cent is shown with the correct obverse to reverse orientation, where the reverse is rotated 180 degrees in relation to the obverse. Virtually all U.S. coins are struck in this manner, aside from some Gobrecht dollars.

I found an oddity recently among my pocket change. It is a 2011 U.S. 1-cent coin. One side, of course, has the Lincoln profile, but when you turn it around, the Shield image on the other side of the coin is upside down — a full 180-degree rotation in relation to Lincoln. Does this coin have any particular value?

The obverse-reverse orientation for this 2011 Lincoln cent sounds perfectly normal and, if circulated, it has no excess worth above its face value of one cent.

This coin’s obverse-reverse orientation is called “coin alignment,” where the reverse of the coin is upside down (or 180 degrees rotated) in relation to the obverse of the coin. With the exception of some Gobrecht dollars from the 1830s, all U.S. coins have been struck with coin alignment.

If one finds a U.S. coin where the reverse is “right side up” in relation to the obverse, that would be an error.

It is perfectly natural that a Canadian might find the coin alignment style of U.S. coins curious to the eye, as Canadian coins are generally struck in medal alignment.

I need to know the value of a silver coin in my possession. The obverse of the coin shows Liberty and the date 1804; the reverse says one troy ounce .999 FINE SILVER/31.1 GRAMS/GEMS BY MICHAEL.

The reverse also has a bell and a eagle.

The piece in question appears to be a privately produced silver round.

An Internet search found the same round, bearing the date 1981 in addition to the other designs and legends on the reverse.

The obverse is a replication of the famed, and rare, 1804 Draped Bust, Heraldic Eagle silver dollar.

The bullion piece has little, if any, numismatic value. However, if it is genuinely one troy ounce of .999 fine silver, it does possess value, albeit based upon its silver content. The spot price of silver, of late, has been about $28 (in U.S. funds) per ounce, so this round would be worth about that much. If selling to a dealer, Mr. Gonzalez should expect to be paid a small percentage less than $28.