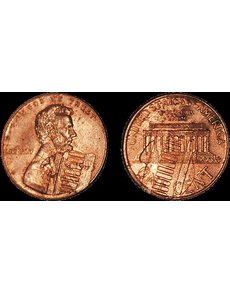 Lincoln cent has glue on both sides of the coin. The glue accepted impressions transferred from different Lincoln cents. Such coins are commonly encountered and can be very deceptive to new collectors.

I found this very unusual Lincoln cent with part of the Lincoln Memorial on both sides of the coin.

Any information you can provide on it would be appreciated.

Based on the image provided, it appears that someone tried to make your coin look like a double-struck cent. While double-struck coins do exist as errors, few genuine examples look like the coin presented to Reader’s Ask.

The 1995 Lincoln cent that you have appears to have glue on it. Take note of the clear, glossy appearance of the Lincoln Memorial outline that was transferred from the reverse of another coin to this one on each side.

Dried glue on a coin can sometimes be deceptive, especially if the coin is then seen through a holder.

In many cases, someone will apply glue and press another coin, even another denomination, into the soft glue, thus leaving an impression of the second coin.

Sometimes the glue prevents the affected areas of the coin from the toning that affects areas not coated by the glue.

In other cases, some glue acts as a corrosive agent and can destroy the parts of the coin it touches.

No matter what the intention or the outcome, the affected coin that the reader has is an altered example that has little or no collector value. While it may not have been intended to deceive collectors — it may have simply been the result of idle time — coins like this do confuse beginning collectors into thinking that they may have a genuine error coin.

I recently acquired 17 modern Lincoln cents that I have not seen before.

They have the outline of various states on the obverse side of the coins. Dates vary from 1960 to the year 2000.

Please help me clear this up.

The addition of state outlines to Lincoln cents is a commonly encountered form of post-minting alteration.

In the mid-1990s, some companies offered 50-coin sets of Lincoln cents that included alterations of state outlines with the two-letter postal abbreviation for the state inside the outline.

Today, some of these coins have made their way back into circulation and that is likely what happened with the 17 coins that the reader found. Such pieces originally were sold as novelties and carry no collector premiums, as the impressions on the coins were created by a private manufacturer after the coins left the Mint.