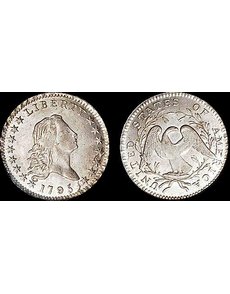 Shown is an exceptional 1795 Flowing Hair half dollar. Often, coins are certified only by date or Guide Book variety, but many rare die varieties can be worth multiples of a common variety of the same date.

I always enjoy getting letters from readers, although in recent years many have been email messages, with only a few typed or hand-written commentaries sent through the U.S. Postal Service. A nice email arrived the other day from A.H., who enjoyed the remarks in the Aug. 27 column.

Commenting on my observation that a dealer sent a Mint State 64 1916-D Winged Liberty Head dime to a grading service 24 times and, on the 25th time, it came back graded MS-65, he said, “All it shows me is that this third-party grading is mostly a win for the people who do the grading.”

A.H. asked, “Would anyone really spend thousands more now to buy this coin?” The answer is “yes,” without question. Probably 95 percent of people assembling collections of certified coins look at what the holder says. Very little is done beyond that. The buyer of such a coin need not worry, for when he or she wants to sell it, someone else will gladly buy it.

While all of this is going on, “cherrypicking” is alive and well. This term, popularized by Bill Fivaz, refers to looking at a coin in a certified holder or in some other holder, and seeing if there is an added value that can be obtained. Sometimes, as with the 1916-D dime, it can be an insight that a coin can be graded higher.

Beyond that, many coins, such as an early Flowing Hair, Draped Bust or Capped Bust silver coin, can be of a very rare die variety worth multiples of the regular price. Or, a seemingly ordinary Lincoln cent can have die doubling, a repunched Mint mark or some feature as described in The Cherrypicker’s Guide to Rare Die Varieties (by Bill Fivaz and J.T. Stanton), making it worth dozens of times more than it would seem at first glance.

Virtually limitless opportunities also exist among certified coins. Although in recent times Professional Coin Grading Service and Numismatic Guaranty Corp. have become sophisticated and have listed die varieties for many issues, millions of coins certified from 1986 to date simply state the date and grade of a certain coin, yielding thousands of dollars in opportunities.

Equipped with knowledge, easy enough to obtain with all of the excellent books and other guides available, you have an equal chance with everyone else.

If you have even a modest numismatic library — say a couple dozen books — you already have an advantage, for 90 percent of the buyers in the marketplace consider only what is written on a holder and its price. There is so much more!