Series of coins from Rhodes may show head from Colossus statue 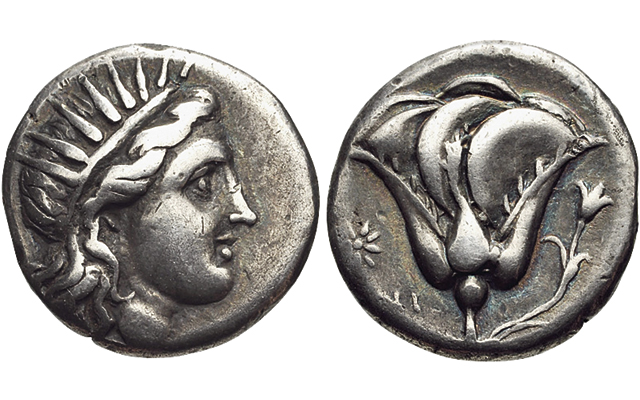 A limited series of silver didrachms from Rhodes show the head of Helios, the sun god, in an unusual sideways-facing design, with a radiate band on his head. Scholars believe this represents the famous wonder found in that city, the Colossus of Rhodes. 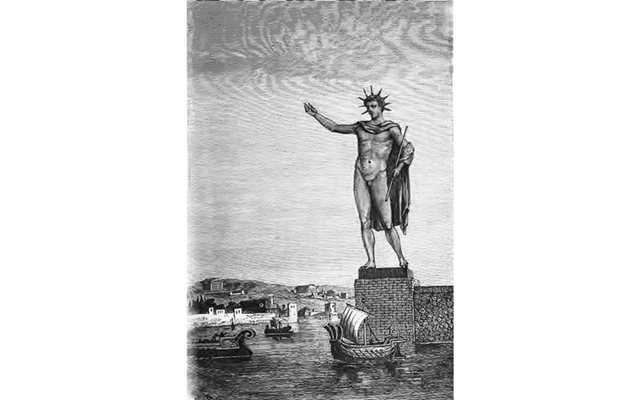 The Colossus of Rhodes, as depicted in an artist’s impression of 1880. 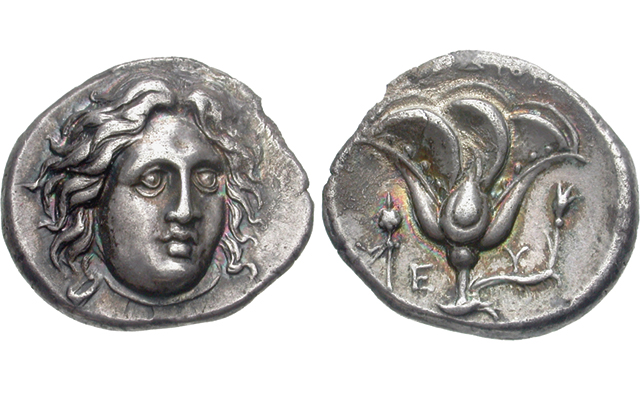 Helios is a familiar sight on the coinage of Rhodes, but usually in a design like this forward-facing bust, another reason scholars believe the special profile design represents the famous statue.

Another famous statue, the Colossus of Rhodes, also does not seem to be depicted in full on ancient coins. However, the head of Helios on a limited series of didrachm coins of this city possibly represents the statue, according to research presented in Richard Ashton’s article, “Rhodian Coinage and the Colossus,” in Revue Numismatique 1988.

Ashton writes that coinage of Rhodes was issued fairly regularly, with occasional spikes in production that correlate to either construction work or military necessity. One such event that triggered additional coinage was the construction of the Colossus of Rhodes.

The Colossus was an enormous bronze sculpture of the sun god Helios that was reportedly built by the Rhodians over 12 years in the third century B.C., with the exact date of completion disputed.

At 100 feet tall, the statue was the tallest of the ancient world. Designed by the sculptor Chares, the statue stood until about 229 to 226 B.C. when it was toppled in an earthquake. It was never rebuilt.

Coinage of Rhodes in general is noted for the facing head of Helios on the obverse and the rose symbol (“rhodos” is the Greek word for “rose”) on the reverse.

Ashton suggests that the series of didrachms struck during the period from 304 to 265 B.C., featuring Helios in profile, financed the construction of the Colossus, and that because the head is strikingly different from the usual portrait of Helios, it may actually portray the head of the Colossus.

There is no surviving account of the outward appearance of the Colossus of Rhodes from antiquity, and “more recent attempts to identify it in extant pieces of ancient art are unconvincing,” wrote Ashton.

Ashton added, “Some clues might however be expected from contemporary Rhodian silver coinage.”

He identified 19 related design types, with minimal stylistic differences, in the series, which was struck concurrently with other issues of the standard design.

The “homogeneity of obverse and reverse styles and the fairly tight die-linking suggest that the series was short-lived,” according to Ashton.

“This would mean that the Colossus wore a radiate taenia (band),” Ashton wrote, which can be seen on the special series of coins.

Ashton dated the special series of coins to 304 to 265 B.C., squarely during the period when the Colossus was built. Records suggest the statue was begun circa 296 to 293 B.C. and finished circa 284 to 281 B.C., but exact dates are unobtainable.

Though the evidence presented is not conclusive proof, the connection between the coinage and the statue seems likely enough to prompt the inclusion of one of these special types in a “Seven Wonders” collection.

Because of its limited issue, the coin is fairly rare; Classical Numismatic Group has sold three examples of the type since 2002. All examples are in VF condition, and each has realized between $600 and $895. Later series coins with a similar design are much more available; Heritage Auctions’ sold a silver drachm, circa 88 to 84 B.C., in a Dec. 12, 2013, auction for $86, including the $14 buyer’s fee.