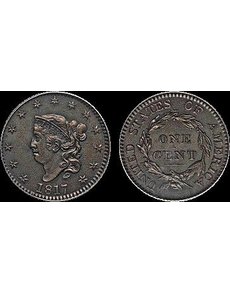 A PCGS AU-58 1817 Coronet, 13 Star cent stickered by Certified Acceptance Corp. sold at auction in April for $920, roughly double the value given in the hobby’s price guides. It sold for Mint State 63 money.

Cabinet friction is not a term you hear much anymore.

For decades it conjured images of the slightest, almost imperceptible rub caused by bluebloods sliding rarities across the velvet lining of their handmade coin cabinets.

For the most part, the term “cabinet friction” disappeared with the rise of the 70-point grading scale. A coin with cabinet friction can now be an About Uncirculated 58 coin. In the cold logic of a numeric scale 58 is always less than 60. In every price guide AU-58 coins are priced less — sometimes much less — than Mint State 60 pieces.

The rub, so to speak, is that almost every collector would pick a raw AU-58 coin over a raw MS-60 coin, especially if he wasn’t using a 40-power glass. The best AU-58 coins are MS-65 coins with a brush of disturbed luster.

What should their value be? Is that bit of wear such a grievous thing that an AU-58 coin is worth less than a baggy, blotchy coin that is technically Uncirculated?

The fashion now is that the AU-58 coin is worth less. But fashion changes, and old collections are littered with once desirable coins that now merit only body bags.

Remember “blast white”? From the 1960s through the 1980s, dealers pushed “blast white” silver coins. And while a blast white coin is beautiful, dealers sold thousands more than ever existed.

Thirty-year-old, blast-white coins submitted to grading services often come back in body bags or in a genuine holder with a Professional Coin Grading Service .92 — cleaned — designation. The price of these once desirable pieces is a fraction of that of uncleaned coins.

Collectors who bought into the “blast white” fashion years ago are paying the price now.

A few collectors are rejecting the tyranny of wear-based pricing and seeking out AU-58 coins. If you look at auction listings you’ll see a flash in the pan now and then when an AU-58 coin breaks out.

At the same April sale, a PCGS AU-58 1817 Coronet, 13 Star cent with a green Certified Acceptance Corp. sticker sold for $920, substantially more than the value given in the hobby’s price guides. It sold for MS-63 money.

Nice AU-58 coins are rare and beautiful. I think they will eventually be priced accordingly. What do you think?