From The Memory Bank: Encounter leads to chief engraver 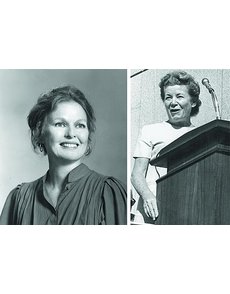 A chance encounter by Elizabeth Jones, above left, with a U.S. Mint official in the nation’s capital late in 1980 eventually led to her becoming the first woman chief engraver of the United States Mint. Longtime Mint Director Eva Adams, right, was influential in encouraging Jones to seek the presidentially appointed post.

In late November 1980, Jones had returned to the United States to visit family and friends. She had intended to stay no more than six weeks. After Christmas she planned to return to Rome, where she had worked as an artist and medallic sculptor for 18 years.

While visiting her sister in suburban Maryland, Jones decided to stop by some art galleries in the nation’s capital. Her medallic sculptures were widely acclaimed internationally, but she was not as well known in the United States. Upon entering one of the galleries, she introduced herself to a young man who seemed interested in seeing her medals. Just as she began to place some on the counter, he said he needed to make a phone call. He returned within a few minutes.

“My father is Roy Cahoon. He asked if you would call him as soon as possible.”

The name Roy Cahoon rang a bell. Jones had met him in the early 1960s when he accompanied U.S. Mint Director Eva Adams on a tour of the Italian Mint in Rome. Jones had served as their translator. At the time she was studying at the Scuolo dell’Arte della Medaglia inside the Italian Mint. Director Adams tried to persuade the young American to return to her homeland then and become a sculptor-engraver at the Philadelphia Mint. While flattered by Adams’ enthusiasm for her work, Jones declined the invitation, noting that she preferred to stay in Rome.

Jones called Cahoon, who put her in touch with Adams. Both encouraged Jones to apply for the chief sculptor-engraver’s post at the U.S. Mint. Chief Engraver Frank Gasparro had announced he would be retiring as of Jan. 16, 1981.

Jones lost little time in submitting her application. She was interviewed by a number of Treasury officials, including Treasurer Angela Buchanan and Treasury Secretary Donald Regan.

Recently, Jones recalled her interview with Regan. Buchanan accompanied her to Regan’s office. “He was sitting at a big desk in the middle of his large office. After greeting me, his first question was, ‘Why do you want the job?’ ”

Jones recalls, “I looked him in the eyes and said, ‘because I think I’m highly qualified.’ ”

Her response was convincing.

Upon leaving the interview, Buchanan advised her not to leave the United States. Jones was sworn into office Oct. 27, 1981, becoming the first woman to be chief sculptor-engraver of the United States Mint.