Plug leads to 75% value reduction on 1797 Liberty Cap half cent: 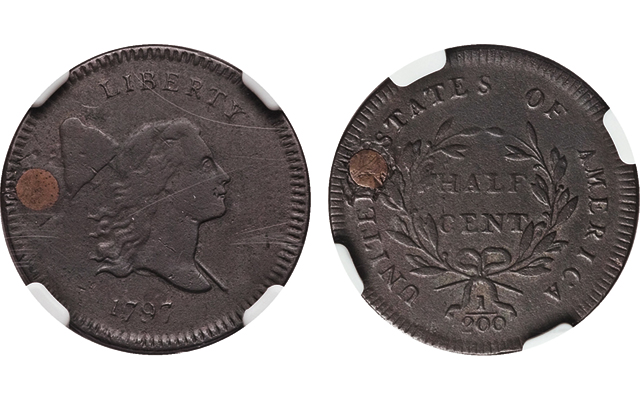 A 1797 Liberty Cap half cent with an old plug and graded NGC Fine Details sold for $367.78 at Heritage’s Sept. 6 Long Beach Expo auction. The white prongs visible in the photograph are from the coin’s holder.

The story: To some collectors, a plugged coin is charming, as it gives a coin a story.

This 1797 Liberty Cap half cent is graded Fine Details, Plugged, by Numismatic Guaranty Corp. Little effort was made to make the plug deceptive.

Perhaps it has been exacerbated over time, but even the two copper colors are different with the plug being shades lighter than the host half cent. Further, the details are not re-engraved over the plug.

To many, the lack of obvious deception in the repair is what makes this coin charming.

A comparably detailed half cent of the same common variety graded Fine 15 by PCGS sold for $1,410 at an Aug. 5 Heritage auction. So, in this case the hole and plug took off around 75 percent of the value from the coin.