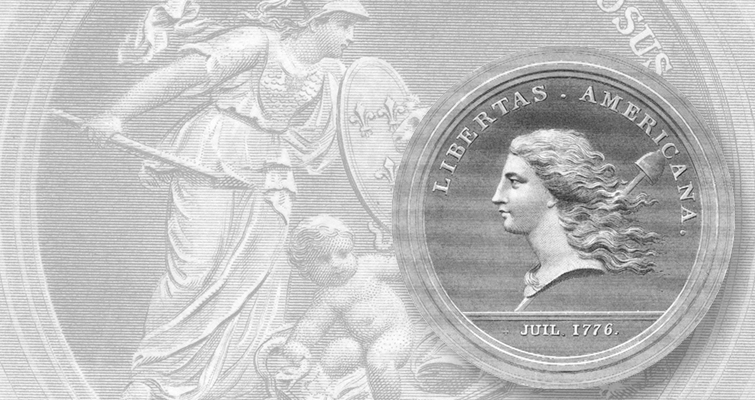 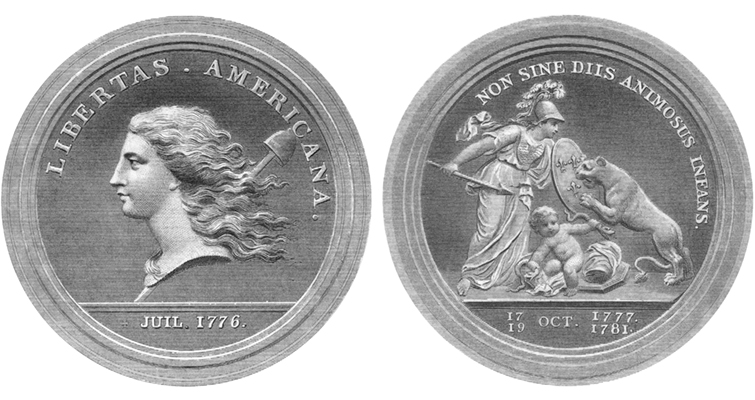 Engraving by J.E. Gavit of the Libertas Americana medal in the collection of the New York State Library, 1850. 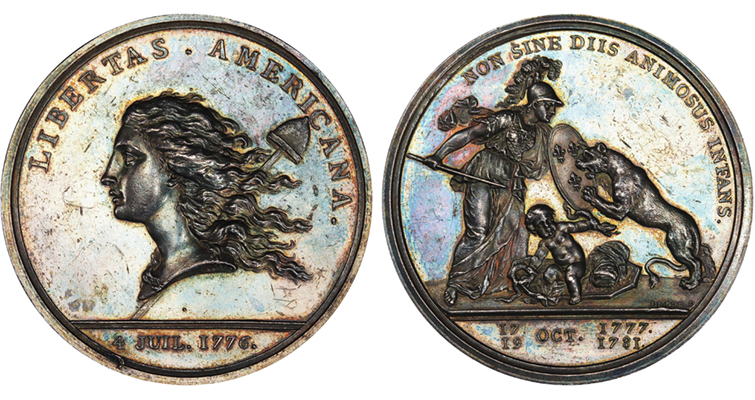 The Libertas Americana medal illustrated above is composed of silver.

The Joys of Collecting column from the Jan. 2, 2017, monthly issue of Coin World:

It was 10 years ago, in 2007, that a book written by Katherine (Katie) Jaeger and me, The 100 Greatest American Medals and Tokens, was published by Whitman.

Since then it has become a best seller and, in addition to being entertaining and informative, has directed many collectors to add tokens and medals to their interests. In addition to listing 100 favorites there is a lot of information about the history and appeal of numismatics over the years.

I hope that you will borrow or buy a copy and read it. The Dwight N. Manley Library at American Numismatic Association headquarters in Colorado Springs, Colo., has copies to loan by mail for free to members.

Katie and I compiled a large listing of tokens and medals based on auction appearances, articles, and other sources. This was sent out to over 100 collectors, dealers and researchers, who ranked them. Soaring into the Number 1 position was the Libertas Americana medal.

In 1850 the example in the New York State Library in Albany was illustrated and described in one volume in a series of five in The Documentary History of the State of New-York, by E.B. O’Callaghan, M.D.:

“Medal to Commemorate the Triumph of American Independence: Device. Head of Liberty; the hair blown back as if by the wind, against which the goddess seems to be running, to announce to the world the tidings of her victories.

“On the right shoulder she bears a liberty cap. Legend. LIBERTAS AMERICANA. 4. Juil: 1776. Reverse. Pallas holding in her left hand a shield on which are three fleurs de lis (the arms of France); opposed to her is a leopard (England), in the act of springing, into whose breast she is about to plunge a barbed javelin that she holds in her dexter hand.

“Beneath the shield is an Infant strangling with one hand a serpent, which he is holding up, whilst he stoops and chokes another found at his feet. Legend. NON SINE DIIS ANIMOSUS INFANS Exergue. 17 Oct. 1777.

“This bronze medal belongs to the Worden Collection of the N. Y. State Library; it is a beautiful specimen of art, and in its design highly classical. Hercules, according to the ancient mythology, was said to have strangled whilst in his cradle, two serpents which had assaulted him, having been assisted by the protection of the goddess Pallas. Infant AMERICA, like Hercules in his cradle, had destroyed two British armies. The two epochs of those exploits are marked in the Exergue 17 Oct. 1777 – Burgoyne’s Surrender at Saratoga—and 19th Octob. 1781 – Cornwallis’ Surrender at Yorktown, Va. The motto is from Horace, Ode 4, Book III. v. 20. The allusion is highly appropriate. The medal was struck by the French government.”

Today as we enter 2017, the beauty of this medal, its rich history, and its inspiration for federal Liberty Cap coinage are undiminished and combine to make this an object of desire for many numismatists — even if collecting medals is not their specialty.

Time increases its fame, so to speak, and today the appearance of a copper example rates multiple paragraphs in an auction catalog, while for a silver impression, a full page display may be in order.

Today these numbers seem reasonable, although perhaps fewer in silver are known than we stated.

If the idea of collecting medals piques your interest, check the websites of the Token and Medal Society (I was among the founders in 1961) and Medal Collectors of America. 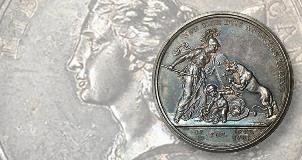 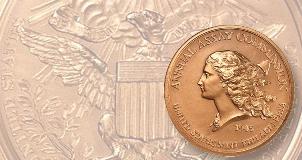 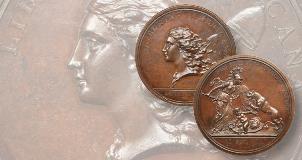