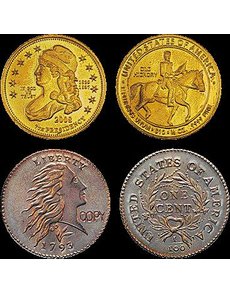 Congress has once again been presented with legislation to amend the Hobby Protection Act.

H.R. 1849 was introduced on May 7 by Rep. Lamar Smith, R-Texas. Smith introduced similar legislation in 2012 but that measure died for lack of action.

The most recent legislation would once again seek expansion of the Hobby Protection Act to cover sales of replica numismatic items that violate the act, and also afford greater trademark protection to grading services’ slabs.

The legislation is in response to the continued threat from Chinese-made counterfeit coins being sold through online auction sites, flea markets and other venues, though few criminal prosecutions have been brought against the sellers under counterfeiting laws.

“It would put teeth into the Hobby Protection Act,” said Eloise Ullman, executive director of the Industry Council for Tangible Assets.

The legislation, if approved by Congress and signed by President Obama, would make it a violation of the act for someone to assist or support “any manufacturer, importer, or seller if that person knows or consciously avoids knowing that the manufacturer, importer, or seller is engaged in any act or practice” that violates specific subsections of the act.

This would include the sale of counterfeit coins in the prohibitions and expand the federal venue and remedies available to victims of counterfeiting.

Currently the Hobby Protection Act regulates the manufacture of reproductions of numismatic and political replicas, including copies of such items as Colonial coins, pioneer gold coins and paper money. Such replicas must be marked with the word “COPY” on one side.

The new legislation, in addition to making it a violation of the act to aid those making, importing or selling unmarked numismatic replicas, would also add a section to the act on trademark violations regarding the “unauthorized use of registered trademarks belonging to a collectibles certification service,” defined in the bill as “a person recognized by collectors for providing independent certification that collectible items are genuine.”

Congress approved the Hobby Protection Act on Nov. 29, 1973. The act designated the Federal Trade Commission to develop regulations regarding how marking replicas would be carried out. The FTC issued its Rules and Regulations in 1975 under the Hobby Protection Act. Those rules established the sizes and dimensions of the letters and numerals to be used as well as the location of the markings.

The rule was amended in 1988 to provide additional guidance on the minimum size of letters for the word “COPY” as a proportion of the diameter of the coin reproductions. ■