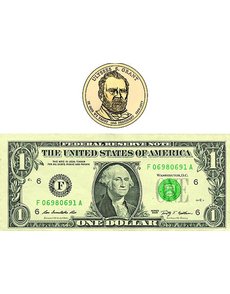 Legislation pending in the House of Representatives would require a transition from the $1 Federal Reserve note to dollar coins.

An ambitious bill calling for a transition from the dollar bill to the dollar coin to reduce government waste was introduced in the U.S. House of Representatives Sept. 20.

H.R. 2977, the Currency Optimization, Innovation, and National Savings Act — or COINS Act — was introduced by Rep. David Schweikert, R-Ariz., and has been referred to the House Financial Services Committee where it sits with two co-sponsors.

Rep. Schweikert is a member of the House Financial Services Committee and the Subcommittee on Domestic Monetary Policy. He stated in his accompanying Sept. 20 press release: “Protecting taxpayer dollars has never been more critical. One area where Americans may be surprised to learn we can save money is in our currency. By making this transition from a dollar bill to a dollar coin, the U.S. will save $184 million a year and nearly $6 billion over 30 years.”

He adds that dollar coins are recyclable and have an average circulation of 30 years, stating, “When you do the math, a single dollar coin can do the job of up to 17 dollar bills over the course of its lifetime.”

The bill joins five bills introduced this summer in the House and a bill in the Senate addressing the government’s problems in getting dollar coins to circulate. The other pieces of legislation focus on the Federal Reserve System’s June 2011 Report to the Congress on the Presidential $1 Coin Program, which found that the Fed’s current inventory surplus of Presidential dollars exceeds 1.2 billion coins and that without modification, at the program’s end in 2016, this number will reach 2 billion.

Rep. Schweikert cited a March Government Accountability Office report that concluded that replacing the dollar note with a dollar coin over a four-year transition period would provide a financial benefit to the government of $5.5 billion over 30 years.

The GAO analysis — its fourth on the topic in 20 years — indicated that while the government would incur a net loss in the first four years due to the up-front costs of the U.S. Mint increasing its coin production during the transition, the remaining years would realize a net benefit. In 2000, the GAO estimated a savings of $522 million per year. The reduction to the 2011 estimate to $184 million annual savings was a result of several factors, including dollar bills lasting longer in circulation and an increase in the production cost of coins.

The GAO report states the obvious in mentioning that efforts to increase circulation and public acceptance of the dollar coin in the United States have not been successful, in large part because of the availability of the dollar note. The report cites the absence of an alternative to the dollar coin as essential to the success of countries that have replaced a low-denomination note with a coin, including Canada and the United Kingdom

A Feb. 18 letter attached to the GAO report by U.S. Treasurer Rosa Gumataotao Rios states that the Federal Reserve is revising its processing methodology for dollar notes that will result in a significant increase in the lifespan of dollar notes and as such, will reduce the estimated savings from replacing the dollar note with a dollar coin.

Rep. Schweikert’s bill calls for the sequestration of all Anthony dollars of 1979 to 1981 and 1999 within six months from when the bill is enacted. The legislation calls for those coins to be released at face value in bulk quantities to coin dealers and to countries that have adopted the U.S. dollar as their base unit of exchange. Several countries currently use the U.S. dollar as its currency including Ecuador, El Salvador and the Marshall Islands.

At the end of the one-year period starting on the enactment date, the secretary of the Treasury would be required to declare the remaining quantities of Anthony dollars as obsolete coins and that they “shall be treated in the same manner as all other obsolete United States coins.” The bill provides that Anthony dollars, to the extent that they remain in general circulation, will remain legal tender.

The legislation would require the Federal Reserve System to conduct outreach and education programs aimed at helping businesses choose the best mix of dollar coins and notes to facilitate transactions and “reduce costs of transactions and of ‘cashing out’ at the end of a transaction period.”

The bill addresses the foreign countries that have adopted the dollar as a base unit of exchange and that place orders with the Federal Reserve System to ensure that those countries are briefed “on the durability and longevity of $1 coins in high-circulation economies when used for transactions of a low dollar value.”

Rep. Schweikert’s legislation calls for an annual report by the comptroller general and the inspector general of the Federal Reserve System and the Bureau of Consumer Financial Protection to issue a report to the House and Senate on the steps being taken to carry out the act.

The bill states that “after $1 coins achieve sufficient market penetration such that consumers and retailers are comfortable using $1 coins and are able to obtain adequate supplies of $1 coins, $1 coins should replace $1 Federal Reserve notes as the only $1 monetary unit issued and circulated by the Federal Reserve System.” It would require Federal Reserve Banks to stop issuing the dollar note four years after the enactment of the legislation or when circulation of dollar coins exceeds 600 million annually, whichever comes first.

The legislation would provide for a transition period where Federal Reserve Banks may not order dollar notes, but may continue to place dollar notes on hand or those deposited with it into circulation. The bill also allows the production of dollar notes “solely to meet the needs of collectors of that denomination,” and notes that $1 Federal Reserve notes would continue to be legal tender regardless of the date or printing of issue. ¦