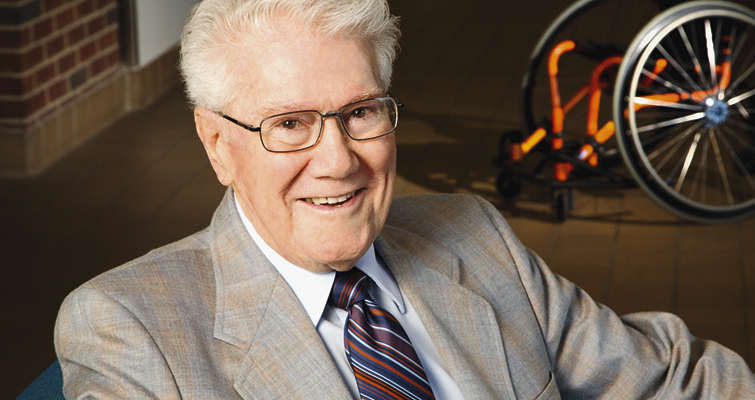 Dr. Timothy Nugent, an advocate for people with disabilities, including disable veterans, would receive a congressional gold medal if legislation introduced July 27 in Congress is passed and signed into law.

Image courtesy of University of Illinois.

Separate bills have been introduced in the U.S. House and Senate seeking a congressional gold medal to be awarded to Dr. Timothy Nugent, “in recognition of his pioneering work on behalf of people with disabilities, including disabled veterans.”

Dubbed the “Father of Accessibility,” Nugent, in 1948 founded the first higher education program for wounded and disabled soldiers in the world after World War II at the University of Illinois at Urbana-Champaign with the Division of Disability Resources. Nugent served as a professor of rehabilitation education and director of DRES and the Rehabilitation Education Center until his retirement in 1985.

Under Nugent’s leadership, the University of Illinois became a pioneer of architectural access, adding curb cuts and wheelchair-accessible bus routes that Nugent himself designed.

According to the two bills, “many of the architectural accessibility standards and laws of the United States trace back directly to innovations created by Nugent.”

Nugent also founded the National Wheelchair Basketball Association in 1949 and served as its commissioner for the first 25 years.

Legislation language would permit the Treasury secretary to direct the U.S. Mint to strike duplicates of the congressional gold medal for sale to the public.