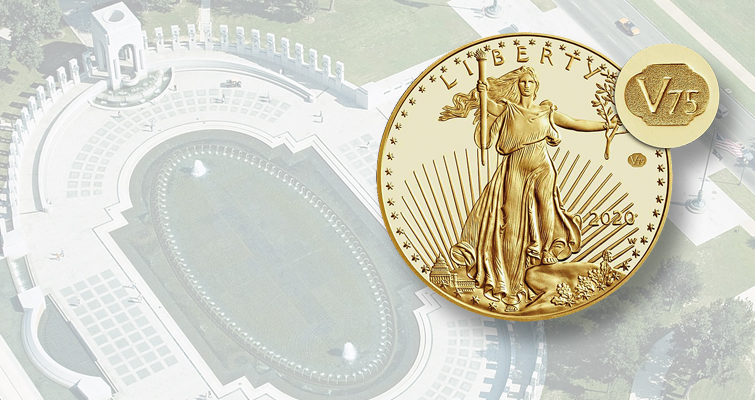 The National World War II Memorial's pool is recognized in the shape of the privy marks on the obverse of the Proof 2020-W American Eagle, End of World War II 75th Anniversary gold and silver coins.

The National World War II Memorial was dedicated in Washington, D.C., on May 29, 2004, and is located on the east end of the Lincoln Memorial Reflecting Pool on the National Mall, and west of the Washington Monument.

The dedication of the National World War II Memorial was the culmination of a 17-year effort that started when the Memorial was authorized by an act of Congress signed into law on May 25, 1993, by President Bill Clinton. Construction began Sept. 4, 2001, after several years of fundraising and public hearings.

Opening to the public on April 29, 2004, the World War II Memorial is the first national memorial dedicated to all who served during World War II and acknowledges the commitment and achievement of the entire nation.

The memorial honors the 16 million people who served in the armed forces of the United States during World War II, the more than 400,000 who died, and the millions who supported the war effort from home.

The pool that is part of the memorial was recognized with a privy mark on the Proof 2020-W American Eagle, End of World War II 75th Anniversary gold and silver coins.

H.R. 1057 was referred to the House Committee on Financial Services for further consideration.

Separate legislation introduced Feb. 11, 2021, by Rep. Gwen Moore, D-Wis., seeks issuance of a congressional gold medal to honor the members of the Women’s Army Corps who were assigned to the 6888th Central Postal Directory Battalion, known as the “Six Triple Eight.” The measure is similar to legislation Moore introduced June 6, 2019.

The new House bill seeks the gold medal to recognize the achievements of the Six Triple Eight, a unit of African-American women whose diligent work overseas under trying conditions, including the sting of segregation, helped ensure that millions of morale boosting mail packages and letters got to those on the war front in Europe during World War II. 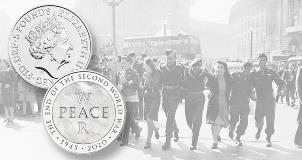 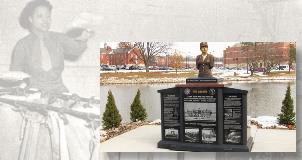 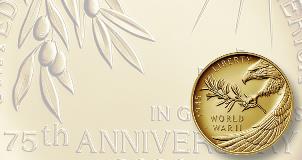