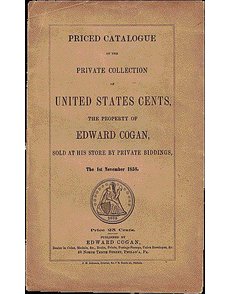 None of it’s true. Cogan wasn’t the first coin dealer, his 1858 sale wasn’t the first numismatic auction, and it wasn’t solely responsible for starting the hobby. New Yorker John Allan began dealing in coins during the 1820s. America’s first coin auction was the 1851 Dr. Lewis Roper sale. By 1858, Boston, New York, Philadelphia and Baltimore all had coin dealers promoting the hobby.

How did Cogan’s Nov. 1 inaugural sale get such a grossly inflated reputation? Partly, the answer is “timing.” In 1858, large cents were all the rage following authorization of their smaller replacements in 1857. Cogan’s sale consisted exclusively of 77 large cents in su-perb condition. The realization —
totaling $128.68 — seemed stratospheric in 1858, and was ballyhooed by Philadelphia’s press.

But give most of the “credit” to Cogan’s shameless self-promotion. The starting point was the February 1867 issue of The American Journal of Numismatics, in which New York dealer Augustus B. Sage claimed he launched the coin market by writing 11 numismatic articles for the New York Sunday Dispatch in 1857.

Cogan fired back in the April 1867 issue of AJN. He recalled that reporting on his first sale “was published … by three of the principal journals in Philadelphia, and was copied by different newspapers in most of the Northern and some few of the Southern states.”

Mustering his (false) modesty, Cogan added, “I plead guilty to always having a secret satisfaction … because it has caused many to ‘style me as the ‘Father of the Coin Trade.’ ”

Collectors immediately swallowed Cogan’s malarkey. J.N.T. Levick, in the November 1868 issue of AJN, wrote: “The disposition of Mr. Cogan’s collection was without doubt the commencement of the furore for collecting …” and numerous coin writers have subsequently exaggerated this misjudgment. Cogan had already fixed one problem that could have derailed his myth-making: his Nov. 1, 1858, sale had had no printed catalog. Why no catalog? And if that be true, how can that very catalog illustrate this column?

Prior to Cogan’s first auction, his 77 cents were numbered and displayed in his Philadelphia store. He instructed visiting customers to send bids by letter. On Nov. 1, 1858, Cogan opened 19 letters and notified the winners. All but three lots sold; the heavyweight was a 1792 Washington cent at $28.60.

As years passed, collectors sought runs of coin dealers’ catalogs to keep track of the market; many asked Cogan for a copy of his first sale. Finally, in 1863, Cogan printed a four-page “catalog,” with an explanatory letter and a listing of bids and prices.