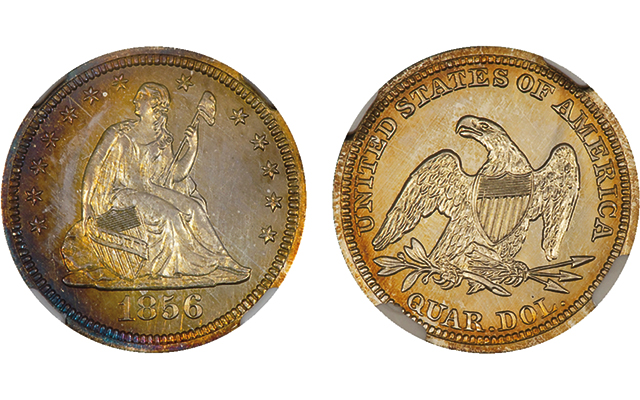 Of the 232 lots offered, 193 were recorded sold. The prices realized include the 17.5 percent buyer’s fee added to the final closing hammer price of each lot won.

Topping the list was the $499,375 realized for the matched original nine-coin 1856 Proof set from the Bob Simpson Collection.

The set was one of four offered in the sale from the Simpson Collection, the others being for the years 1857, 1858 and 1859. The sets were offered intact.

All of the coins in the matched original Proof sets are graded and encapsulated by Numismatic Guaranty Corp. The coins are all pedigreed to collector Simpson, founder of XTO Energy and co-owner and co-chairman of the Texas Rangers Major League Baseball team.

“These sets first surfaced back around 2000, when they were owned by a family from Virginia whose [ancestors] had purchased these coins directly from the Mint,” according to Legend.

The firm stressed that Simpson’s Proof sets were original, containing the same coins as when the sets were sold by the original owning family.

The 1856 to 1859 group was originally placed by Legend Numismatics with a private collector investor, who sold the matched original Proof sets back to the firm around 2003, before they were eventually sold to Simpson.

The next Legend Rare Coin Auctions sale, The Regency Auction IX, will return to The Bellagio in Las Vegas on Thursday, Oct. 2, at the PCGS Members Only Show.

For more about Legend Rare Coin Auctions, email Julie Abrams, call the firm at 845-430-4378, or visit the Legend Auctions website.