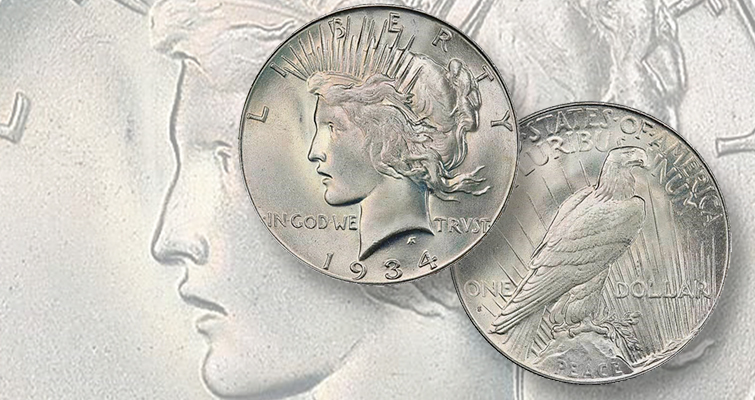 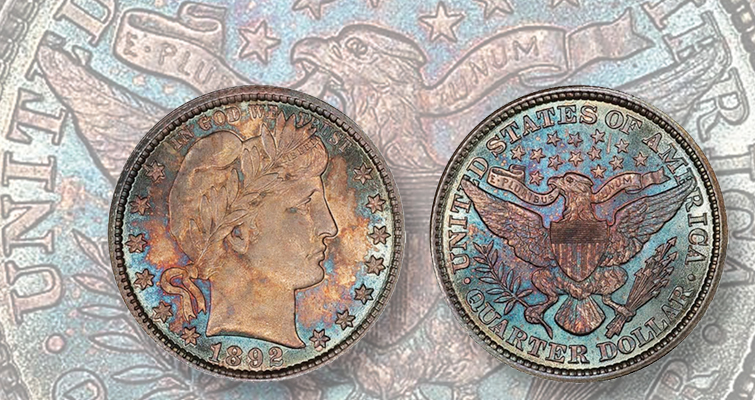 An 1892 Barber quarter dollar is the first year of the design. This MS-68 example with a green CAC sticker, among the very highest-graded of the entire type, is offered at the Dec. 12 Regency 35 Auction in Vegas. 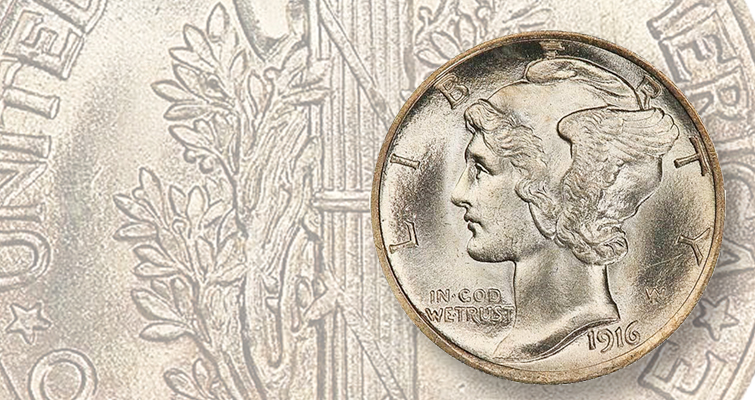 The 1916-D Winged Liberty Head dime is an always-popular key date. A lustrous MS-65+ full bands example with a green CAC sticker is a standout at Legend’s December 12 auction.

Legend Rare Coin Auctions will host one of the last major auctions of 2019 on Dec. 12. Its Regency Auction 35 in Las Vegas features some top-graded coins representing popular types and key dates that are sure to appeal to registry set collectors.

The 1934-S Peace dollar is one of the keys to the series, having a relatively modest mintage of just over 1 million coins, of which few survive in higher Mint State grades. Professional Coin Grading Service has graded just two Mint State 66+ examples with none finer. Neither of the MS-66+ dollars has been previously offered at auction.

That will change when Legend presents one of the MS-66+ coins, which also has a green Certified Acceptance Corp. sticker. It is a candidate for the finest known.

The catalog states, “Totally original, this highly lustrous beauty has a delicate dusting of iridescent, pastel toning that clings to the highly satiny surfaces,” and alerts bidders to the clean surfaces and crisp strike.

Q. David Bowers considers the issue to be the rarest Peace dollar in MS-65 and finer grades. Its rarity began to be fully appreciated in the 1960s after the Treasury Department’s holdings of San Francisco Mint dollars were exhausted and few groups of nice Uncirculated examples turned up. Third-party grading population reports over the past 30 years have confirmed the rarity of the issue.

1892 marked the first year of Charles Barber’s Liberty Head design, which would continue on dimes and quarter dollars until 1916 and half dollars until 1915. As with many first-year coins, the 1892 Barber quarter dollar was saved in large quantities by a curious public, and nice Mint State examples aren’t hard to come by.

Legend will offer one graded PCGS MS-68 with a green CAC sticker that is among the finest known of the entire type and a duplicate from the RSD Collection, which is the all-time finest Barber Quarters Basic Set, Circulation Strikes, on the PCGS Set Registry.

Legend calls the eye appeal stunning, praising its thick, satiny luster and writing, “Marvelous and totally original colors of deep blue, navy, purple, and deep champagne swirl all over.” The RSD Collection upgraded its example to one graded MS-68+ with a green CAC sticker, and Legend adds that with most comparably graded Barber quarters residing in existing registry sets, another may not come to market for some time and estimates it at $25,000 to $30,000.

Unlike 1892 Barber quarter dollars, which are common in nearly all grades, the 1916-D Winged Liberty Head dime is a key date, as just 264,000 were issued on the first year of Adolph A. Weinman’s design. The Philadelphia Mint struck both the new dime and the Barber type, and the San Francisco Mint struck only the Barber design in 1916. The Denver Mint’s entire output of dimes consisted of the new design, but it came late in the year because the Denver Mint focused much of its attention in 1916 on producing the final Barber quarter dollars.

Fans of the “Mercury dime” series prefer Mint State coins with fully struck and separated bands on the reverse. This one, graded MS-65+ by PCGS with a green CAC sticker, has boldly defined central bands on the reverse’s fasces. Legend writes, “Brilliant luster glows all over on this lovely, high-end beauty,” before speculating that it “is a single contact mark or two away from an even loftier grade designation.”

A look at the PCGS Population Report shows 33 in MS-65 and just two in MS-65+. The other MS-65+ coin, with a bit more toning, sold for $58,750 at Stack’s Bowers Galleries’ June 22 Baltimore Expo auction, where the cataloger summarized the issue’s appeal: “While circulated survivors also enjoy strong demand in today’s market, advanced numismatists are aware that the ownership of a Mint State 1916-D Mercury dime is the sign of a truly important collection.”